‘Euphoria’ gets real about the high school experience 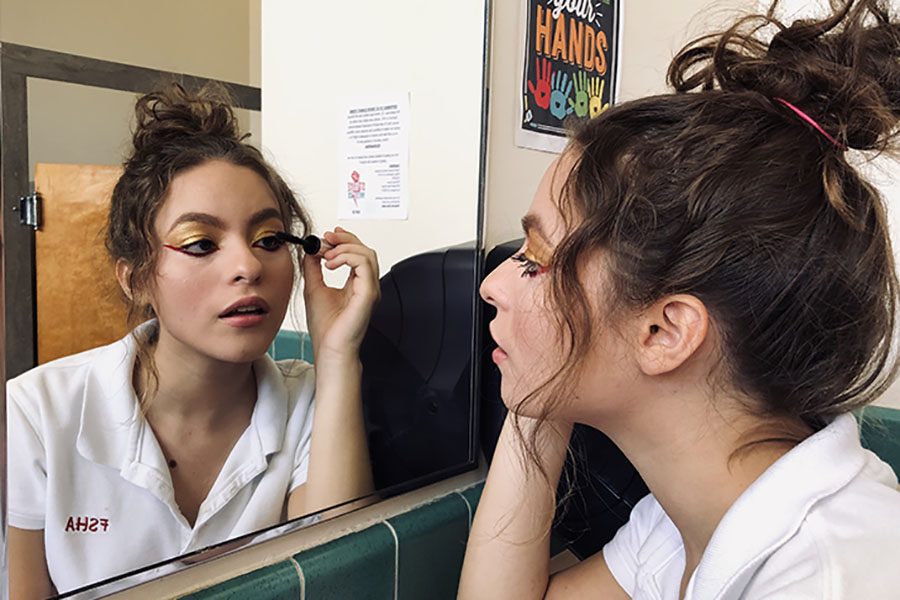 Senior Sam Godinez, inspired by "Euphoria" glam, puts on her best rendition of the iconic makeup looks of the show.

When I stumbled upon “Euphoria,” a new series on HBO starring and narrated by the actress Zendaya, my perspective on portrayals of high school in media took a sharp turn. After consuming a massive amount of high school-centered content in my lifetime, I could tell that “Euphoria” was very different from almost all of it. The glittery, gritty and honestly sometimes hard-to-watch series depicts a group of teenagers in their own little bubble of suburban teen angst trying to navigate personal drama.

“Euphoria” deserves all the hype it’s been getting, truly. The cinematography, lighting, costume and makeup design alone are overall just pleasing to the eye (and a large part of the show’s popularity), and the visual elements are enough to make me consider “Euphoria” one of the best shows on TV I’ve come across. The visual aesthetic of the show ties in with the intensity of the emotions the characters experience. “Euphoria” is very much its own little world: exaggerated sparkly makeup looks, swooping cameras, rotating rooms and strikingly colorful lighting.

That said, the show’s definitely not for everyone. As stated at the beginning of each episode, there are many graphic scenes that could trigger some viewers. The show doesn’t shy away from displaying drug use, sexual content and violence, often in graphic detail.

The president of the Parents Television Council, Tim Winter, released  a warning that “Euphoria” is “overtly, intentionally, marketing extremely graphic adult content, sex, violence, profanity, and drug use – to teens and preteens.” [sic]

The show’s graphic portrayal of sex and violence raises the question, what is too much? Everyone has a different idea of what should and should not be allowed in media.

In recent years, we’ve gotten several darkly themed shows marketed to high school teens. One of the more popular is “13 Reasons Why” on Netflix, which I consider a swing and a miss for a provocative drama series. The showrunners for “13 Reasons Why” were focused on the general problem of suicide and didn’t handle the sensitive plotline with the precision and respect it needed. “Euphoria,” however, at its core, is focused on the inner complexities of each character and the ways in which they go about rectifying their insecurities.

Some people just don’t prefer this kind of content, which is understandable. But a lot of people who object to the show’s graphic nature are missing the point. What people might not be acknowledging is that when fans describe the show as “real and authentic,” they aren’t specifically referring to the profanity, sexuality and drugs. They’re referring to the way in which the show tackles everyday struggles, such as identity, relationships, depression and anxiety — topics central to the teenage experience.

Boundary pushing is scary, but “Euphoria” shows that testing the limits is what makes a good show.