A bittersweet goodbye to a classic car 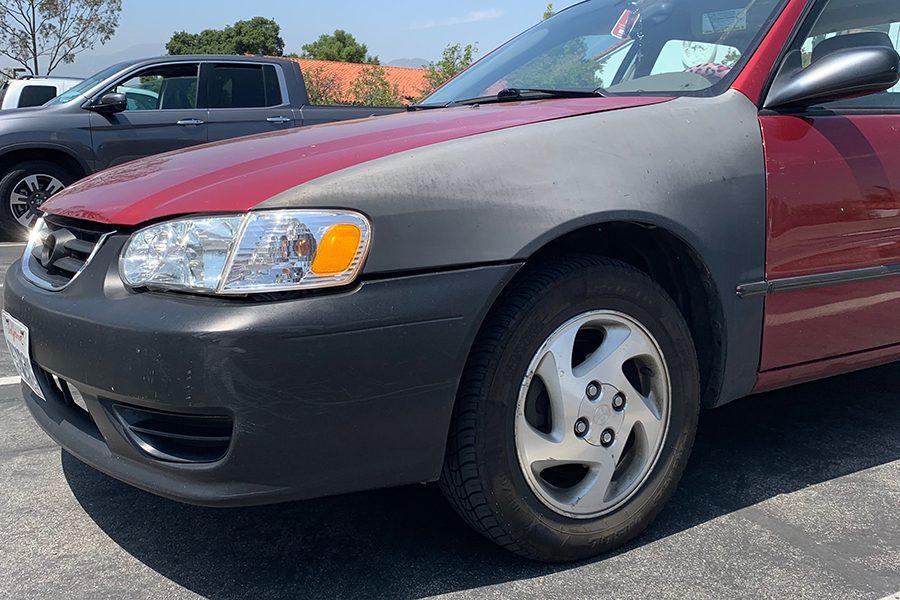 Being told by the mechanic that “painting your car costs more than it’s worth” is a humbling experience. So are the occasions in which rides are desperately needed, but, after offering, people respond with, “Thanks for offering to drive, Mila, but I just don’t feel safe in your car.” Another character-building moment is when I walk with someone over to my car, and the poor unsuspecting person looks at my vehicle, looks back at me, and starts laughing. Sometimes, this laughter becomes nervous, which leads right in to the inevitable question after the car starts: “Are you sure it’s ok that its making that noise????”

Painted firetruck red with unpainted black panels on each side, my ‘01 Toyota Corolla is adorably known to all as “The Ratchet.” The back’s decor is all from my brother’s time driving it: Loyola bumper sticker and license plate, four large dents and countless scratches. I added a rosary and a hot-pink cheetah steering wheel cover for some personalized flare. The inside of the doors are beginning to peel and my door handles are broken, so I push down then out to exit my car. Also, I put a breast cancer awareness ribbon on my antenna and decided to leave it on post-October because it matched The Ratchet’s vibe.

“The cheetah steering wheel gets me every time,” Juliette Guizot said.

My iconic vehicle embodies the debate as old as time: is all press good press? Yes, my car is visually unfortunate. And yes, the noises and problems it creates are quite concerning. My car’s sensitive to weight, meaning that every pound added creates a louder, more worrisome scream whenever the road isn’t perfectly paved. There is not enough room in this piece to describe the noise exerted from going over bumps. “Don’t worry, it just sounds like that,” I assure my passengers who all make concerned eye contact with each other on the first drive in my vehicle.

But I love my car, and I love it because it’s mine. My car’s mere existence is a joke, and I was given a choice: cry about it, or make it funnier. That’s why I added the cheetah print wheel, and it’s really grown on me. My car is memorable, and has a lot more personality than mommy’s spare Range Rover. Driving The Ratchet into a parking lot of what looks more like a country club than a high school makes it without comparison the worst in the parking lot. But I don’t really care. To the naysayers, I tell them, “I’m going to remember that next time you ask for a ride.”

The car speaks for itself, and it’s gained quite a bit of traction and dare I say popularity. Everyone, without a doubt, recognizes my car. The car itself totally and factually sucks, but the community has embraced it.

“The Ratchet (can I call it The Ratchet?) is my favorite car in the parking lot. It reminds me of the 1981 Buick Skylark that I drove to high school. Same color, same kinds of memories, same classic high school car,” Ms. Nora Murphy said.

“It just has so much character. I’m still amazed that she is still working properly,” Meg Momsen ‘19 said.

Other Tologs have joined me in their embrace of their imperfect cars, and a unique bond exists between us teenage owners of dysfunctional vehicles.

Carli Douglas ‘19 drove an iconic box-shaped car, which gained a lot of clout in the Pasadena area. “The box-car became an extension of me; it was awful, and I loved it.”

For some inexplicable reason, people like my car. To this day, I laugh when people compliment my car even though the majority of people inform me how laughable my car is, to which I agree. My car stands out among the sea of Audis and Volkswagens, which initially made me nervous as a freshman, but the hilarity of the situation made it grow on me. The end of high school marks a dive into adulthood for me, and a bittersweet goodbye to the car which cannot be extricated from my high school years. There’s no way I’m taking this car to USC, so rest in peace, Ratchet.