Dr. Sanderson versus astrology: Science clashes with the stars 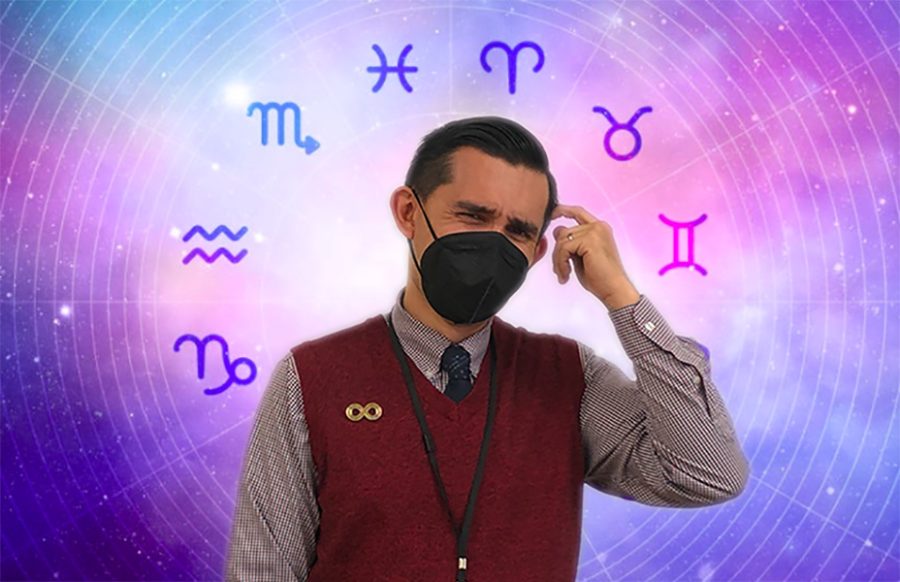 It was another day in physics when our teacher, Dr. Robert Sanderson, surprised us. Our discussion topic started with kinematic equations and quickly changed to one about astrology. Dr. Sanderson said the word “astrology” with an interesting tone that we just couldn’t ignore.

For months, my classmates and I had been trying to find out Dr. Sanderson’s Zodiac sign. This effort did not go very well, and each time we tried, Dr. Sanderson held back. When we heard him say the word “astrology,” it seemed like a good time to ask our questions.

“[Astrology] is a pseudoscience in that it makes claims that make it appear as though it is backed by data and by methods that entail it is scientific, but it is not… it does not adjust whenever there are contradictions to the astrological hypotheses,” Dr. Sanderson said.

Though it has been proven countless times that astrological charts and Zodiac predictions are inaccurate, astrology has continued to be perceived as true by many Tologs.

“In the mid-80s there was a study where they got almost 30 astrologers to come together to participate in this big study to test if birth charts had anything to do with actual predictions, and it was a resounding no; they were not any better than random chance,” Dr. Sanderson said.

Despite his frustration with repeatedly disproven claims continuing to be advertised, Dr. Sanderson bears no resentment towards Tologs who read horoscopes.

“I do have negative feelings for the astrologers themselves because I see [them] as rather dishonest to make claims that have repeatedly been disproved in the last 50 years,” Dr. Sanderson said.

Dr. Sanderson has also come across studies from the 70s that identify people in lower economic brackets and minority groups as susceptible to astrology.

“I have extended that idea to see astrology as a business that effectively preys on the most vulnerable groups. It is a business; it is designed to make money for people. There is nothing wrong with businesses, but there is a problem with a version of astrology that predominantly takes wealth from these minority groups.” Dr. Sanderson said.

Dr. Sanderson also does not like that astrology compels people to make assumptions of others based on Zodiac signs, much in the similar way as people do based on ethnic backgrounds.

“I think it can be a lot of fun. If you treat astrology as lightheartedly as you treat a BuzzFeed quiz, then you are fine. But when you start believing that there is some cosmic truth to astrology such as trying to convince people that a person’s birth date will somehow dictate who they are as a person and who they are able to interact with healthily in life, then I have a problem because prejudice begins to take over.” Dr. Sanderson said.

While students have tried to uncover his astrological sign, Dr. Sanderson is reluctant to release that information.

“I don’t like sharing my own birth date or Zodiac sign because I don’t like that being part of the dialogue. There are enough ways that we all have inherent prejudices without incorporating birthday prejudice,” Dr. Sanderson said.

Dr. Sanderson may not like the business of astrology or astrologers themselves, but he does like the idea of astrology used as a way to improve society, if only it were true.

“I find the whole thing fascinating, truth be told. The reason why astrology has been taken so seriously since it became popular in the middle 20th century is because of the phenomenal ramifications it would have if the astrological hypothesis were true. If you could come up with birth charts that could reliably predict what populations are more likely to have anger issues, we can start treating people preemptively for anger management. We can start helping people with emotional problems and emotional disabilities. If astrology were true, we could use it to improve the world,” Dr. Sanderson said.

Despite his inability to see science in astrology, many Tologs continue to believe. Ava DeFranco ‘22, for example, does not disagree completely with Dr. Sanderson. But she does have hope.

“I believe that in years to come with the improvement of scientific technology, astrology may be able to be proven as fact instead of being a speculated theory. Astrology is essentially just social identity theory. I believe that there could be a possibility that social identity theory has cosmic gravitational links that we may not understand yet in the eyes of science,” DeFranco ‘22 said.