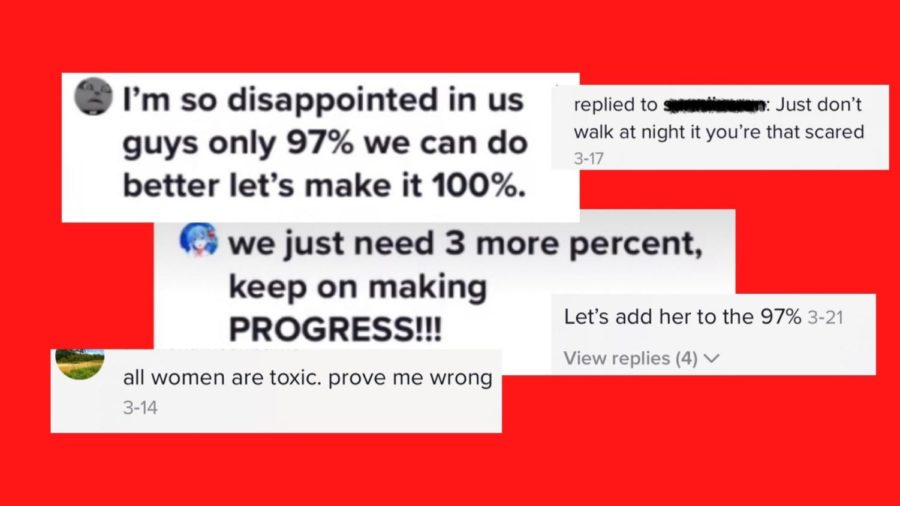 Above are examples of comments that Gen Z boys posted on TikTok in response to a recent United Nations report that revealed that 97% of women in the U.K. have been sexually harassed.

In the last two months, especially April — which is Sexual Assault Awareness Month — many girls on social media have come forward to speak about personal experiences with sexual harassment. This chapter of the Me Too Movement became especially popular when a study from the United Nations disclosed that 97% of women in the U.K. have experienced sexual harassment. On TikTok, girls all over the world began acknowledging that they were part of the 97%.

Among these videos with millions of views, I could not help but notice the various reactions that Gen Z boys posted in the comments sections. I saw some positive responses from guys who genuinely felt bad, but many more boys became defensive, saying things like “Not all men.” Worst of all, though, was the sickening remarks like, “We can do better, let’s make it 100%.”

As a teenage girl, reading these kinds of comments is both disturbing and terrifying. To see boys my age make insensitive remarks about something as devastating as sexual assault is scary. Jokes can be taken seriously, and jokes like these can encourage guys to sexually harass girls. And when some guys out there are saying that 97% of women being sexually harassed is too low of a number, I can’t help but wonder if there are any respectable boys out there who take matters like this seriously. The last thing I want to do is settle for a guy who joins in on a trend like this one.

These Gen Z boys do not do any better during in-person conversations. As a Gen Z woman, I am baffled by how guys would rather joke about sexual assault than speak out against what they must know is wrong.

A close friend of mine, who wishes to stay anonymous, shared with me his own experience of how and when sexual assault is brought up with his other guy friends.

“My friends and I would be arguing about something and one would make a joke saying, ‘I’m going to make you a part of the 97 percent club.’ It is a sense of dark humor, but I know they don’t mean it,” my friend said.

Though these jokes are not frequent in his circle of friends, neither is any serious discussion about sexual assault.

“We don’t talk about the matter [sexual assault] other than that because we live in this constant fear of being judged by others. And by others, I mean guy friends or anyone on social media that we follow. I’d rather not say anything than be judged for what I do or do not say.”

Instead of having meaningful conversations, Gen Z boys are tossing jokes around without any thought of the consequences. Honestly, I am not sure how to get these guys to care about sexual assault in a more meaningful way. All I know is that sexual assault is too serious to joke about and is too important to stay silent about.