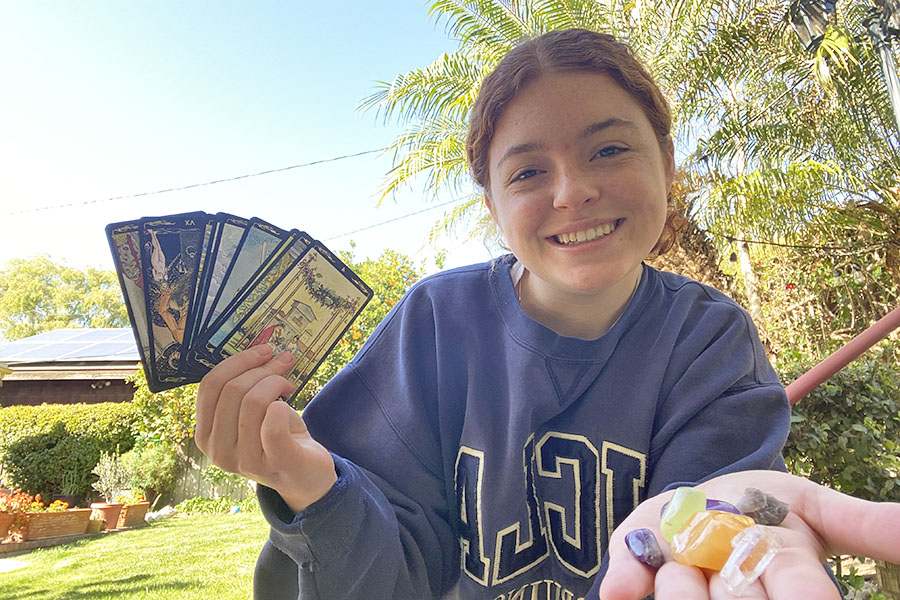 Jordyn Hart '21 shows off some of the features of her New Age spirituality: crystals and tarot cards.

Throughout the wars and civil unrest of the 20th century, many Americans turned toward religion as a source of comfort. Up until the 1990s, approximately nine in ten Americans maintained their religious beliefs, with many of them identifying as Christian. During the coronavirus and the social and political upheaval it has spurred, religious Tologs have found comfort in their faith as well.

“My family has Rosaries with my extended family over Zoom every week. Even though saying all of the decades of the Rosary can be a bit tiresome, it’s nice to be able to connect with my family since we haven’t seen each other in a while,” Ana Cristina Bailey ‘21 said.

Like Bailey, Elizabeth Lund ‘21 feels like her faith has provided her with hope and helped connect her with others in a time of isolation.

“Catholicism for me is what weaves everything together: faith, family and friends. It gives meaning and hope for life beyond this world,” Lund said.

The Catholic church forms the core of life at Flintridge Sacred Heart. The church has also provided Tologs with a sense of stability and hope during Covid-19.

Just as many Tologs have experimented with new hobbies like baking sourdough bread and learning to crochet, however, Tologs have taken advantage of Covid-19 to experiment with their spirituality.

Many Tologs have taken an interest in New Age spirituality, which consists of elements like tarot cards, horoscopes and healing crystals. New Age spirituality concentrates on the soul and the self as opposed to worshiping a higher form of power. These Tologs, including Jordyn Hart ‘21 and Giuliana Casciani ‘21, are part of a bigger trend, with interest in astrology specifically surging worldwide.

Hart’s New Age spiritual awakening began during her junior year. Hart uses crystals, manifestation — the act of believing one’s internal desires and wishes will come true through constructive thoughts — and meditation to connect with herself.

“Spiritually teaches you how to grow better as a person and reduce anxiety,” Hart said.

Hart utilizes crystals primarily as a tool to overcome anxiety. She likes to hold her crystals when she gets anxious or stressed to feel grounded. Hart also believes crystals are a way to connect both with herself and with others who share similar beliefs.

Hart doesn’t follow the moon cycle or fully believe in horoscopes, and she enjoys the flexibility that comes with New Age spirituality.

“You can pick what works for you. I love meditating because it’s something concrete that helps me through the day,” Hart said.

Along with mediation, Hart often takes part in manifesting.

“In my practice, I manifest by picturing myself in the situation I want to occur, whether it’s a state of mind, an improved relationship with someone or future dreams. It keeps me focused on my goals and life, and it reminds me to keep working on myself,” Hart said.

“Meditation isn’t what people think it is. Meditation can be incorporated in your day-to-day life, like sitting in class and taking a moment for yourself or sitting outside playing with your dog,” Hart said.

When she has enough time, Hart likes to sit near a candle, whisper what she would like to improve on, light the candle and then envision herself happy and loved while the candle is lit. Hart believes having that candlelight can serve as a reminder for her goals of self-growth. She doesn’t necessarily believe if she does this her wish will come true, but she does believe that meditating gives her the confidence to accomplish her goals on her own.

Hart performs these practices in order to achieve a sense of control, which she views as a stepping stone to achieving her personal goals. One of the biggest components of spirituality for her is knowing that she can control how she reacts to situations.

“For me, spirituality is a way of slowing down and connecting to myself and the important things in life. It’s also a way of expressing ideas that are difficult to talk about in a way that is fun and personal,” Hart said.

Hart, however, believes in astrology only to a certain extent and compares the validity of horoscopes to personality tests.

“My problem with horoscopes is that they can lead people to categorize others, which will always be dangerous. Astrology can sometimes excuse putting someone into a box, which isn’t okay,” Hart said.

Hart feels that spirituality helps her to grapple with the incomprehensible, such as death. Hart thinks that being spiritual connects her with the fact that she can be at peace without knowing the answers.

“It’s less about the supernatural and more about the grounding routine that my spirituality provides. For me, spirituality is a way for me to ground myself,” Hart said.

Casciani’s New Age spiritual path incorporates Hindu practices such as chakras — spiritual centers in the body — and meditation. She started including different spiritual teachings into her life during her sophomore year World Religions course. Herbalism and yoga have also inspired her to become more spiritual because both are healing practices that she believes work for her.

Casciani believes that practicing New Age spirituality has given her the space to find herself.

“American values are centered around success. Spirituality helped me realize that there was more to life than ambition. It grounds me and brings me to the present. When I began growing spiritually, I felt like I found peace with myself and my place in the world,” Casciani said.

Casciani appreciates manifestation because it helps her place trust in herself and grow individually.

“I do believe that people can find manifestation beneficial because part of the process is to work on themselves. You need to do some of the work and change things in your personal life,” Casciani said.

As well as using manifestation to grow, Casciani looks to nature to guide her spiritual practice, believing the moon plays an important role in our day-to-day lives.

“If the moon controls the tides and human bodies are partially made up of water, I feel like the moon affects us. I instantly feel comforted by the moon when I walk outside at night. I see it as divine,” Casciani said.

In addition to finding spirituality in her natural surroundings, Casciani utilizes tarot cards to discover deeper thoughts in her subconscious.

“I don’t take the readings too seriously, but I also don’t think it’s a way to just have fun. The way you interpret your readings comes from thoughts that were already in your head but weren’t on a surface level. It’s important to reflect on your interpretation of your readings as well,” Casciani said.

She advises that even though growing spiritually helps a lot of people achieve peace, it’s crucial to remember its origins and background. Since many teachings surrounding spirituality come from Eastern cultures, it’s easy for Westerners to take them out of context.

“It’s important to do your own research if you grow interested in partaking in spiritual practices so that you can do it respectively and accurately,” Casciani said.