To drop or keep: What’s the real purpose of A.P. classes? 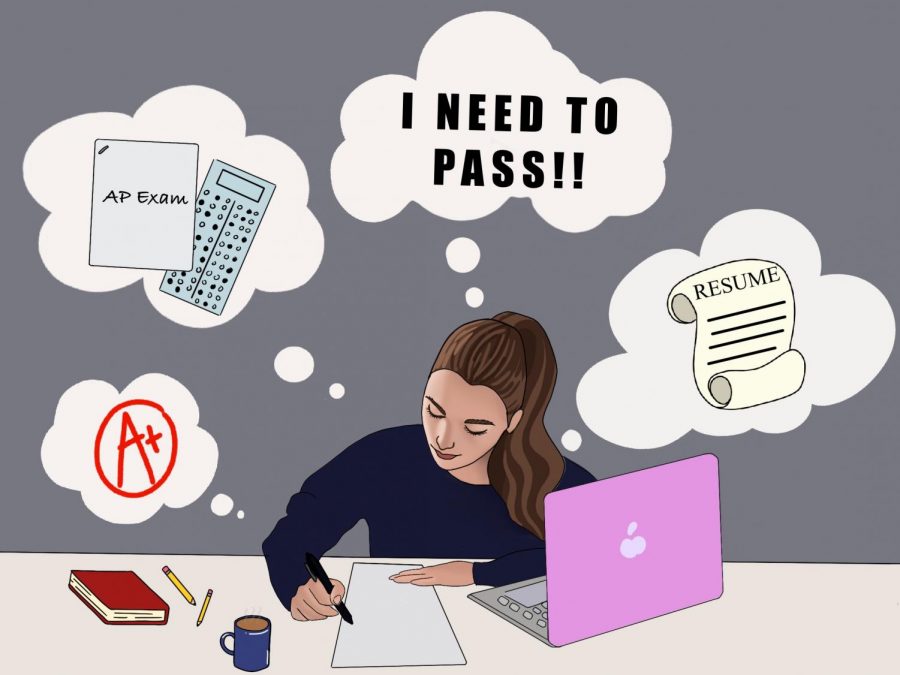 In 2016, The Progressive Policy Institute revealed that 86% of the top 153 universities and colleges in the U.S. restrict the acceptance of A.P. credit, making it difficult for students to save money by placing out of college classes.

I’m standing in my kitchen a year ago, making my lunch, when all of a sudden my mom walks in. She’s usually in the office, so I assume she’s just going to ask if I have volleyball after school and then leave. I am sadly mistaken. Without warning, she launches into one of her “you need to prepare for college” talks as I listen intently, acting as if I haven’t heard it all before. While she often is talking to me about everything I have to be doing, today is the day she focuses on A.P. classes. While I’m sitting there wondering when she’ll finally stop, I realize that there’s only one takeaway message: if you don’t take any A.P. classes your junior year, you can kiss that goal of getting into your dream college goodbye.

Fast forward to now, and the amount of work is building and building. I’m taking practice tests for A.P. US History while scrambling to write my rhetorical analysis for A.P. Language.

This is what a normal school day looks like for me and millions of other students, and while I look out the window daydreaming about going to the beach, I start to wonder what the purpose of A.P. classes is. Why am I doing this? Will these classes help me once I’m in college? Is the grade bump really worth it?

Founded in the 1950s by The Ford Foundation, A.P. classes were originally designed for students that wanted to experience what a college education would be like. As A.P. classes became more common, the idea behind them became less about the experience and more about how the classes look on college applications — along with the grade bump and bragging rights that A.P. classes provide.

“I took some of my A.P. classes because they bump my GPA up by a lot. For computer science, my dad said I need to take it to understand what I’ll be doing in college, which is good motivation but doesn’t make up for the fact that the class is extremely difficult,” Martyna Malolepszy ‘21 said.

While A.P. classes provide students with benefits, there are also drawbacks. A benefit is that students like Malolepszy get to experience college-like courses. On the other hand, there are drawbacks, such as the fact that colleges aren’t accepting as many credits as they used to.

Now, many high schools are gradually moving away from the A.P. format to better prepare students for college and to promote more holistic methods of learning.

“A.P. tests were originally created so that colleges could test the standards and see if [students] could earn credit for them. What ended up happening was that teachers ended up morphing the classes. All teachers were doing was completely teaching to the test… It was outlining like crazy and having kids memorize the material, simply regurgitating it for the test,” Dr. Candy Navarro, the Director of College Counseling and Advising, said. “Realizing this, a lot of independent schools learned they don’t need colleges to know that they’re good schools because of the number of A.P. classes they offer; they know they’re hard schools because of the education and the way of teaching.”

FSH has started to deemphasize A.P. classes as the administration learns more about the A.P. system.

“[Teachers] feel they can really develop richer, more mission-focused coursework that is still advanced level [without A.P. classes],” Assistant Principal for Curriculum and Instruction Ms. Sherrie Singer said. “There are prestigious schools, where kids are notorious for getting into the most highly selective universities on the planet, that haven’t offered any type of A.P. curriculum in 20 years.”

“I think there are plenty of students that take the A.P. classes just to boost their GPA. I also think that, for some kids, their parents put a lot of pressure on them to take those classes, even though they may have no interest in them. This is something we try to discourage through the advising process,” Ms. Singer said.

Like the FSH administrators, A.P. teachers have expressed their concern for their students and the future of the system. They like teaching competitive courses but have also noticed that their students’ reasoning behind taking A.P. classes has transformed over time.

“[In A.P. classes], there’s higher pressure, and students are more concerned about things on the test rather than immersing themselves in the material. It leaves less room for teachers too; they can’t teach more fun material and instead need to be on a narrow path,” A.P. Language and Composition teacher Mr. Andrew Eisenstein said.

Mr. Eisenstein sees the drawbacks of A.P. classes, but he still thinks they’re worthwhile because A.P. classes offer more information than regular classes, and they do prepare students for the amount of work they’ll have to do in college.

“I want the purpose of A.P. classes to be about [helping] students figure out what [they] like and dislike before [they] go to college,” Mr. Eisenstein said.

Mr. Eisenstein, however, expressed concern for his students because he regularly sees them push themselves to take rigorous courses simply because they think it’s what will get them into an elite school.

“They think if they don’t take five AP classes in high school, they won’t stand a shot at getting into a competitive school,” Mr. Eisenstein said.

Mr. Michael Burnett, who teaches A.P. US History, likes A.P. classes because they teach students responsibility and make them explore, analyze and figure things out on their own. He thinks that they do prepare students for what college courses will be like but also thinks that the system isn’t that fair.

“I love the idea that A.P. classes prepare students for college, but, unfortunately, I think the purpose of taking them is becoming more about GPA now,” Mr. Burnett said.

Mr. Burnett wants students to slow down and take A.P. classes that they think they’ll actually enjoy and do well in. He thinks that A.P. classes are worthwhile but that students should not take too many of them.

“If I could fix anything about the A.P. system, it would be to limit how many A.P. classes students can take nationally. This ensures that students really understand the material and aren’t just memorizing and forgetting after the test,” Mr. Burnett said.