The class of 2020 reflects on going to college during Covid 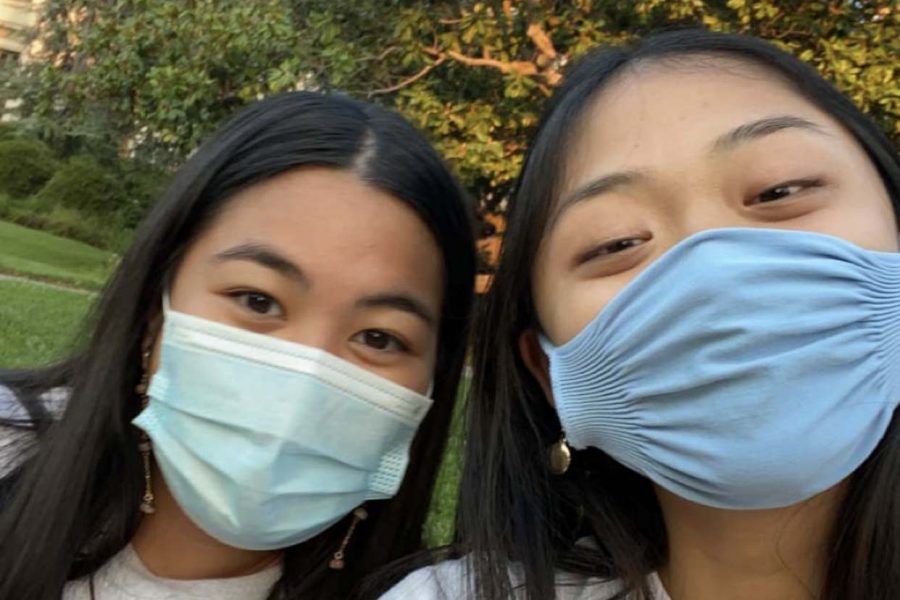 Katrina Manaloto '20 (left) and Meg Kalaw '20 (right) do their online classes together outside, on the Berkeley campus, with masks.

It’s December 2019, and the class of 2020 is just beginning to receive its acceptance letters. The envelopes are coming in the mail, and Tologs are imagining big parties, endless football games and forever-lasting friendships. Yes, college, the thing every Tolog looks forward to.

Fast forward a few months, and everything looks different. Would Tologs physically be able to go to their colleges? Would taking a gap year be more attractive than college online? Would college still be worth it with tuition still as high as $70,000 a year?

One year later, the class of 2020 is now deep into its freshman year, and these former Tologs have had a range of experiences. Some feel lucky to be living on campus, while some are still stuck in their homes. Some have been able to gain that college independence, while some are still waiting.

For those able to go to campus, the big concern has been making friends. For those stuck at home, the desire to start the college experience for real is most prevalent.

Meg Kalaw ‘20 and Katrina Manaloto ‘20 both attend UC-Berkeley and are able to live in on-campus housing and attend classes on Zoom from their dorm rooms.

“I did get to move into dorms last semester, and we were all in singles; no one had a roommate. So it was definitely different because we were all so lonely at first. And we had a quarantine period where you had to get two negative results to be allowed to see people. It was really lonely at first because everyone was just there in their rooms,” Kalaw said.

Despite the implications of the coronavirus, Kalaw was still able to make friends.

“Meeting friends has been really interesting. It is kind of difficult because with the virus and the restrictions Berkeley has emplaced, it is hard to get that human interaction. But most of my friends have come from on my floor,” Kalaw said.

Kalaw had a head start on the friend-making process, for Manaloto is her best friend.

“Starting college with your best friend, especially in the time of Covid, is honestly a relief,” Manaloto said. “I’m so grateful to have Meg here because I never feel alone, and both of us always have someone to lean on when things get tough. We’ve grown a lot closer because of the new things we’ve experienced together, and we’ve been able to navigate Berkeley in the time of Covid as a team.”

Both Kalaw and Manaloto feel incredibly lucky to be on campus and to have had relatively smooth transitions into their first year of college.

“I feel pretty lucky in that I actually get to live on campus because a lot of my friends don’t get to do that at all. So I am getting somewhat of a college experience in meeting people, and I get to be on the campus and experience a new city in that sense,” Manaloto said.

For Kristen Asmar ‘20, living in a dorm would be a dream. Asmar is currently living in an apartment with three other roommates near USC.

“It has been kind of hard making friends. Not being able to live in a dorm is really hard. The dorm that I was supposed to live in is nicknamed ‘Seven Fours of Open Doors,’ meaning you make friends super easily. But with our given situation, no one is really getting that experience at all,” Asmar said.

For Ferryn Drake ‘20, sorority life has helped with the friend process. Drake rushed her first week on campus at the University of Washington and headed into her freshman year of college with new friendships already underway. Even so, Drake has felt as though she’s missing out on the full college experience.

“The hardest part has been hearing other people talk about what could’ve been. I feel like I hear all of the time, ‘We should be doing this,’ and it definitely gets under the skin of my freshman friends and myself. I think just the reminders of what this year is supposed to be like, having these giant, beautiful buildings on campus that I haven’t been inside and that I have to walk past all of the time — the thought of what my freshman year is supposed to be like is one of the hardest parts,” said Drake.

Lea Lopez ‘20 is attending NYU and has been home her whole freshman year of college attending classes online. For Lopez, missing out on life in New York has been a struggle.

“NYU was my dream school, and I got in in December, so my senior year, I was so excited. But with everything going on, not being able to physically go to school and have that regular college experience is really hard. At the beginning of the year, even over the summer, I thought that I was going to be able to go to New York and live on campus. At the last minute, I realized it wasn’t going to be possible with everything going on, so I had to stay home,” Lopez said.

Little did Lopez know, she would have to stay home her whole first year of college.