The 12 movie reviews of Christmas 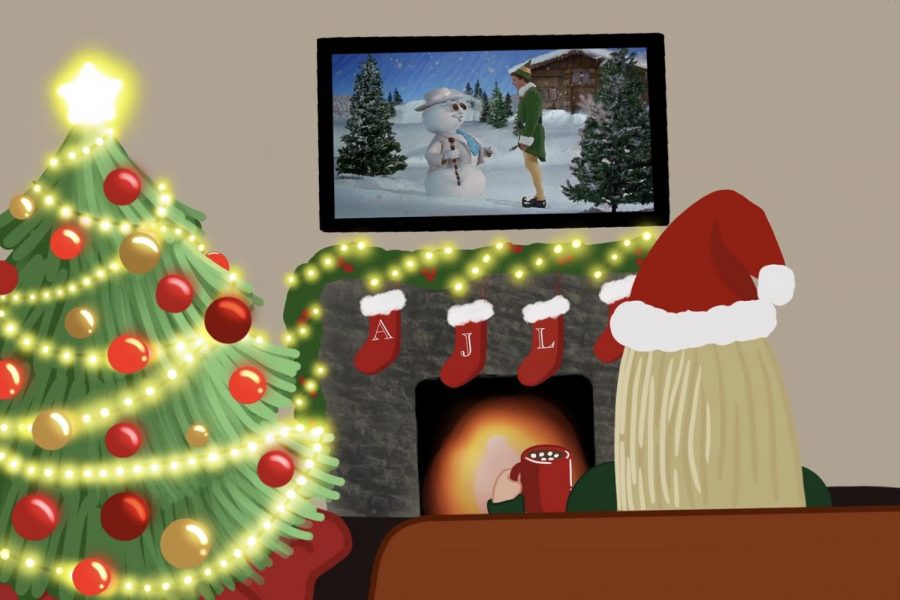 Even if your living room doesn’t look as picturesque and festive as the one in Natalie Oktanyan ‘22’s drawing above, you can still spend break watching holiday movies in bed on your laptop.

During the holiday season, what better way is there to get in the Christmas spirit than to watch Christmas movies? Nothing beats curling up on the sofa with a cup of hot chocolate steaming, a fireplace crackling and a Christmas tree glowing to watch some holiday movies with your loved ones. With a seemingly unending supply of Christmas movies, though, picking what to watch can be difficult. To help you choose, Veritas Shield writers Siena Urquiza ‘23, Jacqueline Fitzpatrick ‘22 and Kailey Cullen ‘22 have provided their insights on 12 Christmas flicks.

A simple and classic story, “A Charlie Brown Christmas” is one of my favorite holiday movies. Charlie Brown finds himself lacking Christmas spirit, so he takes on the responsibility of Christmas pageant director. Charlie and his friends do various wintery activities, such as ice skating and buying a Christmas tree, all set to relaxing jazz music. This smooth jazz music fills me with a sense of calm like no other, and the simple animation is comforting. While this movie’s pace is pretty slow, it’s only twenty minutes long, and I find it to be a relaxing rather than boring watch. It takes me back to my days in elementary school, when my classmates and I would all sit at our desks with hot chocolate and the teacher would play “A Charlie Brown Christmas” on the projector. The dry humor of the characters, with their bickering and sarcastic remarks, makes me giggle. “A Charlie Brown Christmas” is a heartwarming story, and it’s great to put on when you are in search of some Christmas nostalgia.

A BB gun, a lamp shaped like a leg and a pink bunny suit are not very Christmas-y things, but after watching “A Christmas Story,” you will remember them as a part of the holiday season. This movie follows the story of Ralphie, a nine year old who wants a BB gun for Christmas and gets into lots of trouble with his friends. “A Christmas Story” has quite a few chaotic moments, from Ralphie running from a bully to Ralphie almost shooting his eye out. This film will be sure to hold your attention the entire way through. “A Christmas Story” has the classic 80s feel — home decor straight from grandma’s house, a classic family neighborhood and some good-old-fashioned 80s-kid shenanigans. “A Christmas Story” is a funny and endearing portrayal of family life with characters that every member of the family can relate to.

This movie has got to be not only one of my favorite Christmas movies but one of my favorite movies of all time. Kevin McCallister, an eight year old whose incredibly large family leaves him behind during their Christmas vacation, is tasked with defending his home against a pair of robbers. Kevin expertly and hilariously navigates his time left on his own. Macaulay Culkin could not have done a better job playing the role of Kevin. His snide remarks and great facial expressions really help Kevin to leave an impression on the viewer. The Chicago streets covered in snow and rows of houses lined with Christmas lights create the quintessential picture of Christmas, and the wintery atmosphere is sure to put you in the holiday spirit. This exciting, wholesome and hilarious film is one you can’t miss watching during Christmas time.

With charming animation and an entertaining plot, “Klaus” is a fun watch. The story follows a postman named Jesper’s encounter with Mr. Klaus. The two eventually team up to deliver toys to the children of a rundown and divided town called Smeerensburg. The movie is quite funny, with colorful characters and goofy jokes throughout. The animation style is beautiful and simple, giving the movie a cool atmosphere. While the film is a tad predictable at times, the fun characters, original story and lovely look of the movie made up for it. “Klaus” is a wholesome and beautiful movie that you should add to your list.

This classic episode of “How the Grinch Stole Christmas!” is a perfect way to get into a Christmas mood. As you watch the movie, you feel like you’re back in kindergarten, and your teacher is reading you a book. The characters look cartoonish and adorable, and the animation style looks like it came right out of the Dr. Seuss book. The movie was enjoyable, but the directors and writers did not really take many risks by changing anything from the book.

This was my least favorite rendition of “How the Grinch Stole Christmas.” Don’t get me wrong, I love Jim Carrey, but this movie was just overall creepy. Every time the Grinch spoke with his strange croaking voice, my ears cringed, and I got less and less interested in the movie. Also, the strange costume design just took me right out of the Christmas spirit. The Grinch just looked like a dog with a two-dimensional face. Despite this, Jim Carrey was cast very well in this role. He is great at playing these strange, quirky characters.

I love this version of “How the Grinch Stole Christmas!” It offers a more modern take by including songs from Tyler the Creator and celebrity voices like Benedict Cumberpatch, Rashida Jones, Keenan Thompson and Pharell Williams. Keenan Thompson from SNL as one of the Whos from Whoville is one of my favorite characters. He is hilarious, and even though he isn’t one of the two main characters, he adds so much humor to the movie. Unlike the other adaptations, in this film everyone that lives in Whoville is always welcoming towards the Grinch and leaves it up to him to decide to make a change in his attitude. This change makes the people of Whoville more enjoyable and likeable than they are in the 2000 version, where they are annoying and rude. The animated characters are adorable, and overall the movie is well put together.

After you get all Grinched-out, you can always turn to this cheesy yet charming rom-com on Netflix. Vanessa Hudgens plays a high school science teacher who gets tangled up with a time travelling knight from the 14th century. With a one-and-a-half-hour run time, the movie is an entertaining and quick and easy no-commitment watch. It is a feel-good flick that you can enjoy with the whole family.

If you enjoy the Christmas season but find yourself nostalgic for Halloween, then this film is just for you. Written and produced by Tim Burton, “The Nightmare Before Christmas” provides the perfect transition from the spooky season to the holiday season. That said, if you scare easily, perhaps it’s best to put off watching this movie because of its detailed-yet-creepy animation and music. The main character Jack Skellington lives in Halloween Town, but one day, as he is wandering through the woods, he discovers a portal that transports him to Christmas Town. Inspired, Skellington makes a plan to take over Christmas, and, suffice it to say, the plan doesn’t go perfectly. If you’re in the mood for an unconventional Christmas movie, give this film a watch.

This Christmas comedy classic is a must-watch every holiday season. Buddy, played by Will Ferrell, is a human who was raised by Santa’s elves in the North Pole. In the movie, Buddy undergoes an identity crisis and travels to New York City in search of his biological father. The movie is the definition of feel-good. I watch it with my family every year, and it’s always a good laugh.

One of my favorite Christmas movies is definitely “Arthur Christmas.” From the title I’m sure you can guess that the main character’s name is Arthur. The story follows him on his journey to save Christmas after Santa, his dad, forgets to deliver a gift to one child. I first saw this movie in the theater nine years ago with my mom and brother, and I loved it. After watching it again all these years later, I can say nothing has changed. With an interesting portrayal of Santa as modern with lots of technology, I find this movie to be unlike any other Christmas animation. It brings me back to my childhood, and I’m sure it will do the same for you because of the fun and lighthearted plot and detailed graphics.

“A Christmas Prince” is the perfect combination of sweet, witty and dramatic. This story follows a journalist by the name of Amber who is assigned to uncover the truth behind the charming Prince Richard’s upcoming coronation in his country of Aldovia. Initially their relationship starts off a little rocky, but it swiftly progresses into a passionate romance. Because of the entertaining plot and likeable characters, the movie kept my attention from beginning to end, despite it being a bit predictable and cheesy. The movie features a beautiful setting with a magnificent castle and a large, snowy mountain range. I am a sucker for a sappy love story with a happy ending, and “A Christmas Prince” is exactly that. If you love romance movies this is a must-watch, along with “A Christmas Prince: The Royal Wedding” and “A Christmas Prince: The Royal Baby.” Also, the British accents are definitely a plus.