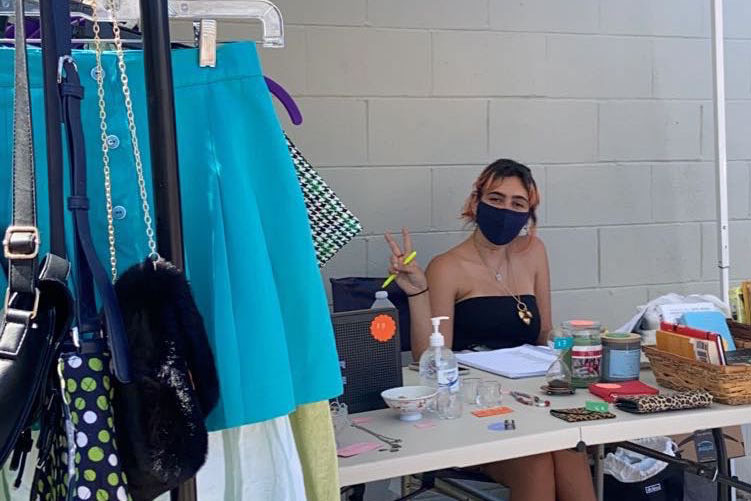 At her booth at the Silverlake Flea Market, Giuliana Casciani ‘21 sells numerous items other than vintage clothing, including crystals, books, and even fairy wings.

Teenagers around the world are dealing with quarantine boredom in different ways. Some have taken up new hobbies like cooking, watching endless amounts of Netflix, going on daily walks or bonding with family members 24/7. Some, on the other hand, are starting businesses.

Giuliana Casciani ‘21 has used these drawn-out days to start her own vintage shop. She sets up on weekends at the Silverlake Flea Market in Los Angeles from 10 a.m. to 4 p.m. on Saturdays or 12 to 5 p.m. on Sundays.

In order to gain insight into the process of becoming a flea market seller, the Shield spoke to Casciani about the logistics of setting up a booth, the best parts of selling at the flea and, now that she’s settled into her new job, her advice for Tologs who might want to follow in her footsteps.

Starting a business: The first steps

Casciani got a job last summer working at the Gerrish Swim Club as a grill worker. She got her first taste of income and knew she had to find a way to continue making money after the club closed due to Covid-19. She considered what she liked about working at Gerrish and what she hoped to do with her future. Ultimately, as someone who frequently visits flea markets and wants to start her own thrift shop, she decided to start selling at the flea.

“Randomly, in the middle of the night, I ordered cheap clothing racks and started digging through my closet for old clothes that I could sell,” Casciani said.

She went to the Silverlake Flea website and booked herself a Saturday spot for a whopping $95. The flea market takes place every weekend, Saturday being the busier of the two days. Saturday is the more expensive day to book and the more reliable one when trying to make money.

“The first day I was selling, I had to have my dad come to help me set up my tent, racks, tables and all the clothing. I wanted to have someone with me to scope it out and help me not embarrass myself when struggling to carry everything in and out. The first time I went I was really only selling my old clothes. I made a profit of $100, which was actually really rewarding,” Casciani said.

After the first couple of weekends, Casciani decided that her booth was in need of a vibe change. She wanted something that would make her booth more appealing, and she accomplished that by selling vintage clothing she could be proud of rather than selling her own, old clothing that she wanted to get rid of. She rebranded, if you will.

“I sell mostly vintage clothing now, rather than my old clothing that no one really wants. I thrift and buy vintage in bulk mostly. I also get a lot of clothes from my grandma and those pieces do surprisingly well. I’ve also noticed that pants sell really well. I have a whole table full of cool pants that attract a lot of people to the booth. Statement pieces are really what people at these flea markets seem to be looking for,” Casciani said.

She buys vintage clothes in bulk from online stores in order to fill her booth. Along with the unique clothing to attract more buyers, she also bought other things to make her booth overall more alluring.

“I also started decorating my booth more. Bringing colorful tapestries to hang as the walls of my booth, incense to burn and even a speaker to play some music and set the tone. I also bought crystals in bulk to start selling and add another aspect to my booth,” Casciani said.

While Casciani enjoys the income she makes as a seller, a big part of why she continues to buy her slot at the flea markets is the unique community made up of people of all different ages, backgrounds and perspectives.

Flea markets are a way for Casciani to socialize and make friends that she would not normally get to make. While walking around and visiting different booths, you can meet tons of unique people who are happy and willing to have a conversation. Everyone is dressed in cool outfits with different kinds of hairstyles, piercings and tattoos. This variety makes the overall environment extremely refreshing, even with masks on and booths spaced out because of Covid.

“I’ve met a lot of people through the flea market. Small businesses really support each other, especially during a time like this. It is evident when you walk into the flea. Everyone’s friendly with each other and hype up each other’s shops. Everyone there is in the same position right now, trying to make money and grow their business,” Casciani said.

From casual conversations with her neighbors to spending the whole seven hours talking to someone from set-up to clean-up, Cascani has made more friends at the flea than she was expecting.

“Specifically, one woman came into my booth searching for a dress to buy and change into because it was extremely hot outside and she was wearing pants and a long sleeve. She found a green dress that she loved and immediately changed into it,” Casciani said.

While slipping the dress on over her clothes, the woman, who also has a booth at the Flea, expressed her gratitude to Casciani and started talking about basic flea market topics like shop names and what they sell.

“I began talking to her, and we exchanged our business Instagram accounts, and she was really supportive of me even though we just met. I actually bought something from her booth later that day. She sells these cool body-shaped vases with bouquets that you can handpick. The next weekend I went to the Los Feliz Flea Market to scope it out and ended up running into her again. We both remembered each other, and I bought another item from her booth,”  Casciani said.

Every time Casciani returns to a local flea market, whether it’s the Silverlake Flea or not, she is greeted with familiar faces within this new community.

Starting your own booth: Advice from a vendor

Many teens have wondered how to move forward during a pandemic and what they can do to productively fill their days. Casciani found her answer with her vintage business, and she has plenty of advice for teens who might want to follow in her footsteps.

“If someone at FSH, or anyone really, wants to start a booth at a flea market I would probably advise them to start differently than I did. I jumped right into it and went to the one flea I really knew, which is about $90 to get a spot. You should start at a cheaper one like the Los Feliz Flea Market, which I think is $40. Get cheap racks and tables, don’t spend a lot of money on that, and use the clothing you have that you want to get rid of first,”  Casciani said.

She then elaborated on how to make a booth feel welcoming and attractive to everyday flea market-goers.

”Decorate your booth. Make it look welcoming. Add different aspects that make you stand out a little. For example, I started selling crystals at my booth as well as clothing, and I used tapestries and incense to attract people. You could even sell things like art or music if that’s what you’re good at or interested in,” Casciani said.

She also gave advice on how to make connections with people around you and get the best possible experience.

“Always talk to whoever you’re placed next to. It is really fun seeing how everyone got started, or what their business is really about. I buy a lot of things from my neighbors. I bought a really nice pumpkin candle and some Jewelry. It’s better to have friends there and people you know will support you than sitting by yourself for hours,”  Casciani said.

Casciani continues to sell at the flea market on most weekends and really enjoys going, even on the hot days when she’s overheating under her tent for hours at a time.

“I want to invest a lot more into this. I really want to own my own vintage shop one day. This is just a starting point for me,” Casciani said.