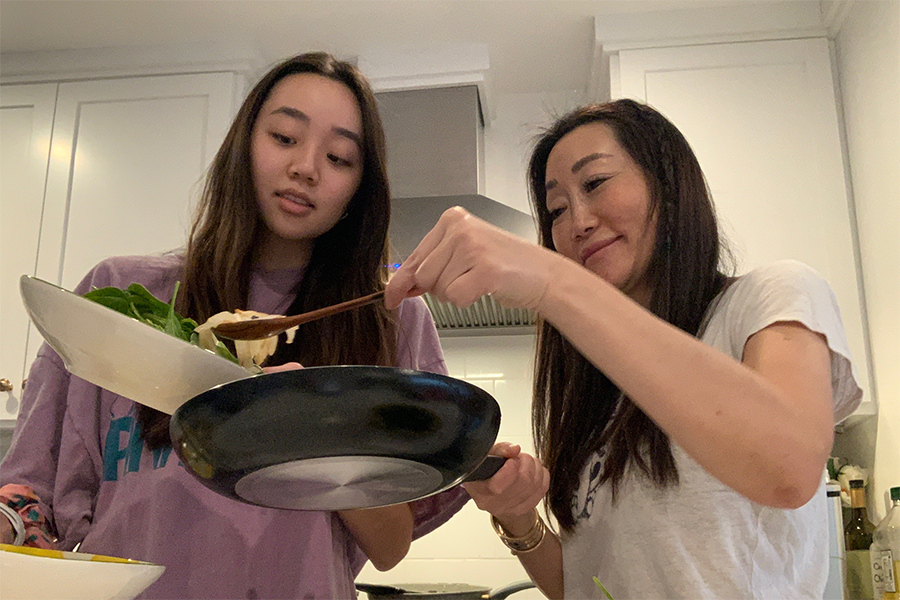 In the midst of the chaos of the Covid-19 pandemic, both Jalen Lee ‘21 and her mother Catherine have undergone surgery.

In between chopping vegetables, Jalen Lee ‘21 pauses to admire the pink clouds mottling the late-afternoon sky outside her kitchen window. Standing nearby, her mother distributes handfuls of spinach into bowls. They catch each other’s eyes and smile before resuming focus on their separate tasks. For Lee and her mother, every moment spent together without worry is special. After all, the Lee family has endured countless trials throughout the years, and 2020 was no exception.

While eating lunch at school in February of last year, Lee began coughing. Suddenly, she felt like she couldn’t breathe. Lee, who has always felt uncomfortable asking for help, told herself to push through the discomfort, which proved incredibly difficult. As she walked to the admin building for her next class, she strained for breath. Every few steps, she felt as though she was suffocating. When she finally went to the hospital a few days later, she found out her lung had completely collapsed. Lee spent four days in the intensive care unit with a tube lodged in her side to remove the excess air from her chest cavity.

Months later in May, Lee was sitting at her desk at home studying for her AP Lang exam when she felt a sharp pain seize her chest. Having recently encountered issues with her lungs, she immediately felt wary of the strange sensation. This time before her AP Lang exam, however, was different from the first time. Despite the pain in her chest, she could still breathe normally.

“At first, I ignored [the pain] because I was scared and also because I had to study for the AP Lang test and get it over with, since it was my last AP,” Lee said.

She completed her exam, but after two days of pain and lethargy, she decided to go to the doctor’s again.

At the doctor’s, Lee received a chest X-ray. Waiting for her results, she scrolled through her phone, trying to find a distraction from her feeling of foreboding. Then, the radiologist, the same man who had diagnosed Lee the first time, asked to see her. Her lung had collapsed again, and given this was the second time, she knew she had to get surgery to prevent her lung from collapsing a third time.

Lee underwent surgery in June. The operation involved a pleurodesis, a procedure that consists of adhering the lung to the chest cavity through the creation of scar tissue, and a blebectomy, the removal of small air sacs, or blebs, on the outside of the lung that cause the lung to collapse when they rupture.

After her surgery, Lee spent many days in the hospital alone because of restrictions implemented as a result of the pandemic.

“It was during Covid, so I was very alone. I was in the hospital for six days after my surgery, and I was there mostly by myself because my mom could only come during specific visiting hours,” Lee said.

Once she was released from the hospital, Lee slowly recuperated during the summer months.

“After I recovered during the summer time, I was like, ‘I’m healed, I feel better. This is perfect for going into senior year. I can really focus,’” Lee said.

As summer progressed, Lee felt stronger each day. August rolled around, and she was recovered and ready to take on her senior year.

Then, the unthinkable happened.

“I was happy, because I was like, ‘I don’t have to worry about health problems during this time.’ And then I found out my mom was diagnosed with thyroid cancer,” Lee said.

Again, she was inundated with anxiety. Lee’s father, LAPD Officer Nicholas Lee, died in the line of duty in 2014. Her mother, Cathy Lee, is her only parent, the sole provider for Lee and her younger sister, Kendall.

“When I first found out about her diagnosis, I felt those feelings of ‘why me.’ This is the worst time for this to happen. I was really nervous, because I didn’t know what my future would hold,” Lee said. “Just the thought of losing my mom, my only parent, that was the scariest thing.”

On the day of her mother’s surgery, Lee woke up at 4:00 a.m. to drive her mother to the hospital.

“I didn’t want to have my grandparents drive my mom because they don’t have a GPS, and it would just be really complicated for them,” Lee said. “I saw her get wheeled into surgery, and then I drove back so I could start school at 8:30. I did one class, and then, in the middle of my second class, I got a call from her surgeon saying that the surgery went well and that she was ready for pickup.”

At the end of the day, after moving back and forth between school and looking after her mom, Lee felt exhausted.

“It was just a really hectic day, and I felt really overwhelmed,” Lee said. “It’s hard because [my dad] passed away six years ago now. I try not to constantly think about him, because it kind of holds me back from moving forward and healing, but especially during these hard times, that is always the first thing to come up, you know, because it would just be so nice for that extra support system to be here to help me.”

Lee’s resilience and bond with her mother helped her to persevere through adversity in the midst of an already chaotic year.

“I have such a close relationship with my mom, just because we’ve been through so much that has really pulled us together, and I’m so grateful for that,” Lee said.

As a result of the operation, Lee’s mother is now cancer-free.

“I’m so grateful because she’s healthy, and she’s slowly getting back to normal,” Lee said.

Now, with her mother regaining health and vaccine distribution underway, Lee feels hopeful when she looks into the future. Next school year, Lee will attend Barnard College in New York City.

“Especially with college and everything, I am excited to go out and start this new life, I guess, and meet new people and experience new cultures in a completely different place. That gives me hope. I’m so excited for that moment, and I guess that’s what really keeps me going. I’m excited to see life in different forms, in different places,” Lee said.