Theater during a pandemic: Ms. Mac spills the tea on ‘The Girl Who Was a Hundred Girls’ 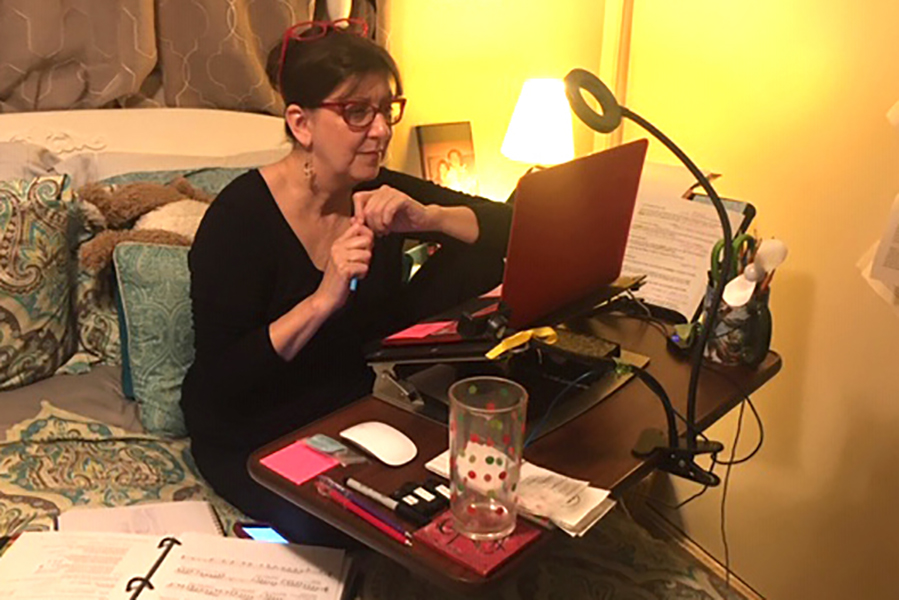 Theater teacher Ms. Jane McEneaney coordinated with a team of editors to create the fall play, which will be live streamed on Stellar Tickets in a series of four episodes.

By Ella Kitt and Claire McDonald

As a result of Covid-19, theaters across the globe have been forced to cancel their productions and shut their doors to the public. Nevertheless, theater teacher Ms. Jane McEneaney — known around campus as Ms. Mac — has ensured that the show will go on, virus or not.

On Dec. 2, 5, 9 and 12, the school’s fall production, “The Girl Who Was a Hundred Girls,” will air on the platform Stellar Tickets in a series of four short episodes (buy tickets here). We spoke to Ms. Mac about the production and the process of directing a play over Zoom.

Why was it important for you to have a production this year?

We had to cancel the spring show, “Mary Poppins,” last year, and I knew there was a lot of disappointment and heartache from that. So, I didn’t want to continue that disappointment. I know that you guys are all struggling with the online format, and the distance and the separation — all those things. I didn’t want to be one more thing that got canceled from your life. I thought it was important that we come together. Also, I think theater can be done anywhere, anytime. You know, like I’ve always said, “Give me a bathroom stall, and I can put on a show; it doesn’t matter.” I wanted to defy all of the limits and be what I think theater people are, which is resilient, strong and creative. So, I said, “Let’s try it.”

Why did you decide to air this production in parts?

I hear if you do anything for more than 30 minutes in the arts, you go insane. I wanted to make sure that people didn’t burn out on the show after a day of school. I thought if we did it in a mini-series, it would give everybody on campus something to look forward to. There really hasn’t been anything where collectively we all go, ”Oh, we’re all gonna go do that today.” I wanted to give people a reason to stop and be intrigued, entertained, educated or however you want to look at the show. But also, I wanted to keep it going in little bite-sized pieces. We wanted it to be doable, not a burden, not something that keeps you from getting your homework done or that you would get up and walk away from.

How did you discover “The Girl Who Was a Hundred Girls,” and why did you end up choosing it?

The play we did last fall, “This Girl Laughs, This Girl Cries, This Girl Does Nothing,” was written by the same guy, Finegan Kruckemeyer. When I was looking for material, I was looking for stuff that speaks to women and also something that would fit this format. So, I went back and read some of Kruckemeyer’s work and I found this play and it really moved me. The message is so important. It’s about resilience and hope and being a 16-year-old girl, which made it even better. They’re all faced with huge challenges, and they overcome them, and I wanted that to be the message that I gave to my girls and the bigger Tolog community. You guys are all joining class in the dark, and I can only see the top of your head. You open the window behind you, so I can’t see your face. That is no way to go through this thing! Stop quitting. Rise up. Fight the bull. Dodge the bullets. So, I really was inspired by that [message]. I read it three times and cried all three times. So it’s a winner.

Was it important for you to have a play this year that had a lot of roles so everyone could participate?

You know, I looked at it a few different ways. I wasn’t sure people would show up for a week of audition workshops. The regulars came, you know, the tried and true, but then this little army of 10 freshmen showed up, and I just knew that I wasn’t going to let them down. They said “yes,” and they didn’t know me. They didn’t know each other. So, I thought it was a great opportunity to put everyone together and find a way. There isn’t actually an ensemble written into the play; I just created it, which I tend to do, because I’m a big believer in the ensemble.

What are the unique challenges of directing a play over Zoom?

In the actual rehearsal process, I’m asking them to look into the camera and not look at the person they’re acting with; that’s really freaky. The girls are doing things like banging on imaginary stuff, and they all have green screens. There are so many limitations. If they stand up and move back, they become small, and getting everyone to all keep their frames equal was difficult. I wasn’t expecting girls to be reluctant to be seen through camera, especially seniors who do theater. It’s really, really hard to make connections [over Zoom].

How did you surmount some of those challenges?

I tolerated a lot of things that I would never tolerate in the normal rehearsal situation. I was much more aware of everyone’s wellness. For the seniors, it was really hard for them to focus and concentrate in September and October. That was a lot for them to manage. This year has been an eye-opener for me.

How has theater been a safe place for people to express themselves creatively and work through their emotions in this difficult time?

My hope is that it’s a safe place for everybody. We have Saturday morning rehearsals where we get to know each other better and we do a lot of different exercises. I think having this place to go every week was something that gave people a break. During their rehearsal days or their Saturday ensemble, they are given a break from everything else and a place to make-believe and tap into other things and remind them of their creative potential. Even the adults in the project have noticed how supportive all the girls are. When one girl goes down, the others help. I’ve been particularly impressed with the freshmen and how willing they are to reveal themselves and to support one another. It’s just been beautiful. They’re an incredible group of girls.

We wrapped on Nov. 7, and I’ve been in here doing the editing since that day. It’s at least 10 hours a day for me with the editor and sound person, and for them, it’s even more. I work closely with Gabby, who’s our main editor. We work through it, and I’ll be like, “Whoa, maybe we could try this, or here’s a good idea, or there’s only eight of the 12 girls in the ensemble. Where did the other four go?” There’s a lot that is involved. But, we’ve used a lot of beautiful scenic art and great music. We have some original music written by two friends of mine, and it’s really cool to watch it all come together. But, it has been a lot tweaking and sending it back. I’ll say, “Oh, that sound effect isn’t loud enough. Can we have louder bullets flying by?” I’ve been learning a lot about how it gets done. Not well enough to do it myself, that’s for sure! It’s so much work.

How do you think the pandemic has changed the future of theater?

We’re all sad and dreaming of coming together one day. But what I think is the best is that the actor’s union for theater actors has waived a lot of their regulations. So now we’ve all been able to watch amazing productions online. The theater community said, “You will not shut the virtual door. You can shut the door to our theaters, but you will not stop us.” That’s just how we are. People are offering classes, and I’m doing panels. The Actor’s Fund is doing this thing called Stars in the House, where they raise money for actors. They are going to have a reunion of the cast of “Godspell” from 1975. People have been doing really great play readings and all sorts of innovative offerings. So, theater has become more equal in terms of financial access. People have just blown the doors wide open and provided an opportunity for people to learn and watch and be a part of it. Normally, Broadway is so expensive. You either save up your quarters, and you do it, or you find the lottery that you get a $20 ticket. But now, everybody’s seeing everybody’s work. I hope that when we do come together again, that [The Actor’s Equity Association] doesn’t put up the barriers again. There are a lot of Facebook groups and things where we help each other and share our shows. I keep saying this, but when we finally get back on that stage, I just want girls to feel the audience. You want to hear that awesome sniffle in the house. That’s the one thing that we can’t wait for.

In essence, what do you hope people will take away from the production?

Nothing should get in the way of your dreams, your aspirations or your determination, including this stupid pandemic. I wrote a play in 2003 and its message was to fight to the end, and I feel like that’s a big message during this time. Especially as women, just keep moving on and do what you know is right for you is my big message in this piece. I hope that everybody who watches it sees how brave, courageous and beautiful the theater girls are. They didn’t let anything stop them. We don’t know anybody’s true struggles, what they’re going through with this isolation and disappointment. So I think it’s important that we celebrate for this little moment in time.