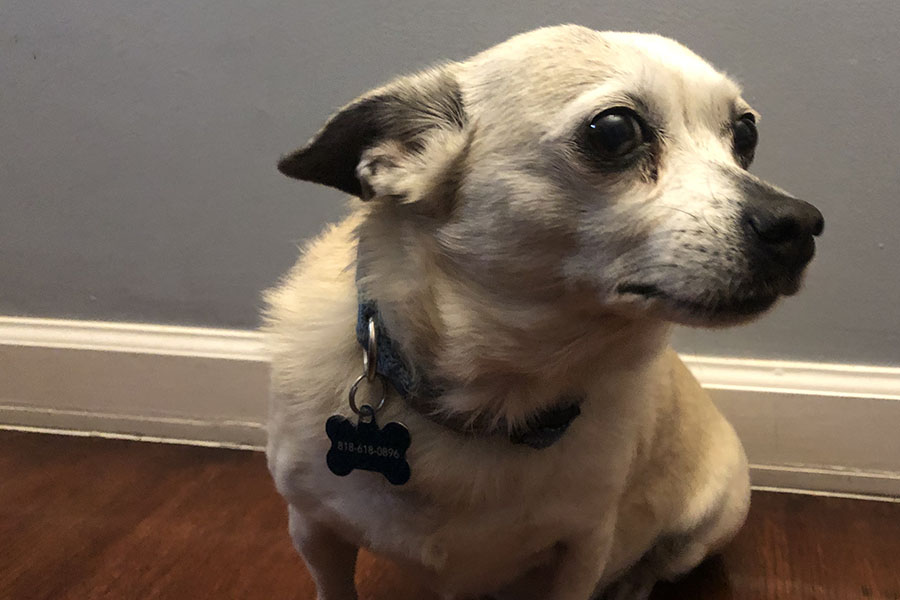 Don't be fooled by this furry friend's sparkling eyes and fluffy coat; at heart, he's a vicious attack dog.

On the afternoon of Friday, October 23, Jacqueline Fitzpatrick ‘22 and Michelle St. Denis ‘22 finished up online school in their comfy sweats and sweatshirts and put on some more suitable going-out clothes. Like many people nowadays, these Tologs were excited for any excuse to get out of the house. They got ready, brushed their hair, put on makeup and did all the things one does to prepare to head over to a St. Francis boy’s house to hang out.

As they pulled up, the front door of the house swung open and out came two small chihuahuas, one black and one tan. Fitzpatrick did not expect that, in a matter of minutes, one of these dogs would be attacking her face.

Fitzpatrick walked inside the house, sat down and noticed that one dog had gone to sit on the couch and the other in an open crate. Fitzpatrick felt cautious with the one in the crate due to previous unpleasant encounters.

“I had been bitten by the tan one before, but I just wanted to pet it again. How can I resist the little cute furball?” Fitzpatrick said.

Fitzpatrick built up a little confidence to approach the tan dog in the crate.

“I decided that it would like me because it could see that the other dog was letting me pet it, and so I tried to pick it up. I thought it would give me a second chance,” Fitzpatrick said.

Fitzpatrick would soon realize that the little ball of fuzz was even more vicious than she remembered.

“I didn’t think anything would happen,” Fitzpatrick said. When she bent down to pet the chihuahua, she brought her face down with her.

Unfortunately for Fitzpatrick, things did not go as well she’d hoped.

“Before I knew it, his jaw was on my face,” Fitzpatrick said.

In shock, Fitzpatrick could barely formulate a sentence or even acknowledge what had just happened.

“I couldn’t even say anything, and it didn’t hurt. I just could not believe the dog bit my face,” Fitzpatrick said.

When Fitzpatrick went to touch her face to check the severity of her new injury, her feeling of disbelief quickly became a feeling of worry as she saw the blood on her hand.

“I ran to the bathroom and got a bunch of tissues so I could get off the blood dripping down while also trying to remember how to disinfect [my wounds], since for all I know, it could have been a rabid dog,” Fitzpatrick said.

Not knowing what to do and feeling alone, Fitzpatrick went to find her friends and show them the damage.

“Look, guys! Look what that dog did to me,” Fitzpatrick said.

Upon seeing the puncture wounds, St. Denis started laughing uncontrollably and described them as “holes in her face.”

Ignoring the unhelpful commentary, Fitzpatrick went straight to her friend the St. Francis boy, the owner of the dog.

After these unexpected events, the night came to a close, and Fitzpatrick and St. Denis headed home. But on the way, Fitzpatrick’s mom noticed and asked for an explanation.

“I told my mom what happened, and she was in shock as well, mostly due to the minuscule size of these dogs. But we both decided to wait a few days before seeking any medical help,” Fitzpatrick said.

At this point in the car ride home, Fitzpatrick just wanted to put the day behind her and forget the whole thing ever happened.

“I was so done with the day. My face didn’t even really hurt, but it was just so swollen that I didn’t even want to show my face on Zoom calls for school,” Fitzpatrick said.

After the jam-packed day, it was time to move on and start to heal, both physically and mentally.

“It took about a week to heal and a trip to the doctors, where they prescribed two antibiotics, one for the dog bite and another for a flesh-eating bacteria that kills people that the doctor worried I might have,” Fitzpatrick said.

After going through such a traumatic experience, Fitzpatrick now takes extra precautions when coming into contact with dogs.

“If I do ever go back [to my friend’s house], I am for sure never coming within 10 feet of that dog again,” Fitzpatrick said.