The evolution of my TikTok taste 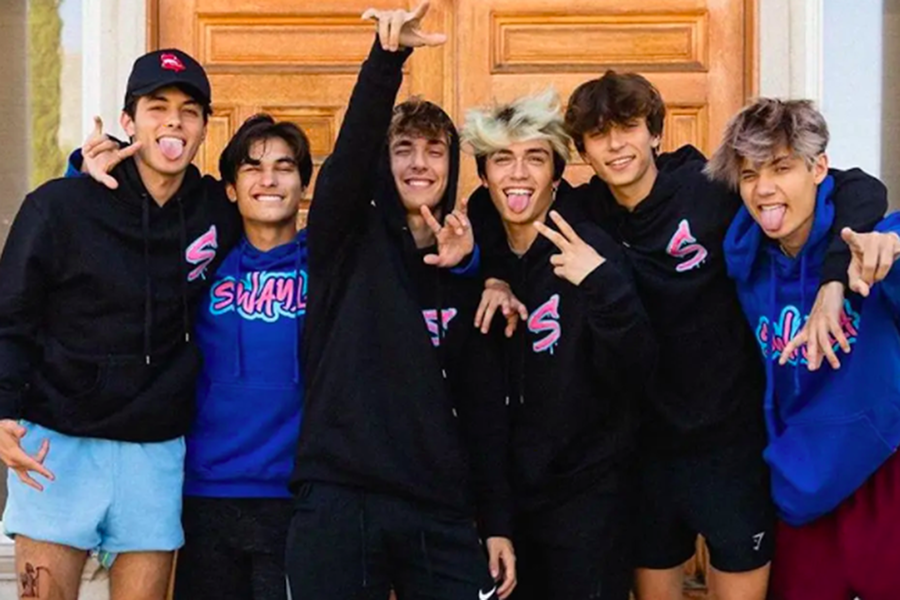 These are the Sway Boys. They are immature and egotistical. And, they are are a little out of sync with the national mood.

You open TikTok after a long day of school, and the first thing you see on your For You page is a video of a 17-year-old boy with frosted tips dancing in a group of poorly dressed teens with tattoos on their arms and legs. These are the Sway Boys of TikTok, the social media app where users can post videos of themselves dancing to popular sounds and pranking their friends, all with huge smiles on their faces. At first, I was obsessed with these boys, but after watching their videos all the time for a while, I started to realize that I was outgrowing them. I started to realize, also, that the world we’re living in was outgrowing them, too.

In the Sway Boys’ TikToks, they are always at their mansion in the Hills, jumping from their roof into their pool while their friends cheer them on. They always have tons of people over (apparently they’re immune to Covid) and never fail to throw crazy parties. There is so much chaos going on that you don’t know where to look; the Sway Boys never seem to have a normal day. And, their fans love this. Their videos normally have over 2 million likes and the comment sections are filled with 12-year-olds begging them to reply.

At first, I thought that these tan, athletic boys were cute and deserved to be famous. I liked that they would always post a lot of videos and collaborate with each other. Their Tiktoks were fun, and I loved watching these boys dance. Soon, though, I realized that the Sway Boys were extremely immature. All they do is dance shirtless while bouncing off the walls like little children. On a trip to Texas, they went driving in an ATV and flipped the vehicle purely for fun. One of them ended up getting stitches because he wasn’t wearing a seatbelt, but that didn’t stop him from doing it again after he got back from the hospital. After a while, I started to think that the Sway Boys represented not youthfulness and amusement but idiocy and mindlessness. So, I unfollowed them and stopped liking their TikToks.

In addition, given what’s going on in our country — racial injustice, a heated election — the Sway Boys’ type of content started to feel out of place. As I became more aware of real-world problems like inequality, the Sway Boys started to matter less to me. And I’m not the only one; I’ve noticed in my friend group that people are talking more about politics and not so much about the Sway Boy drama. They just don’t matter as much as they used to.

I still follow funny users, but the content they post is much more entertaining than the Sway Boys. One user I love, Noah Miller, is usually seen posting about other TikTokers and how they’re problematic. He posts relatable content and usually says what all of us are thinking when we see a TikToker that’s acting fatuous. The people I follow genuinely care about what’s going on in the world and regularly post about ways to help others. Seeing these types of users has made me realize that the Sway Boys are only focused on gaining popularity and partying rather than taking time to better educate themselves and become self-aware.

Some political content shows up on my For You page, which I always watch to better educate myself. I have learned more about what’s going on in the world and how I can help others just by going on TikTok. One account that I follow lists ways to help small businesses during this pandemic and provides petitions to sign. Another account that I love is Claudia Conway’s. She is the daughter of Kellyanne Conway (a former counselor to President Trump) and posts about what’s really going on in politics. Conway got famous on TikTok because she tells the public what’s really going on inside the White House.

I don’t think that I will ever go back to watching the Sway Boys’ type of content. Given what I watch and what I know now, going back and watching the Sway Boys would be a step backward. There’s always going to be idiotic stuff on the internet, but at least for me, the Sway Boys have stopped mattering as much as they once did. I’d rather stay focused on the bigger things that actually matter.