Justice on the internet: Who’s in charge? 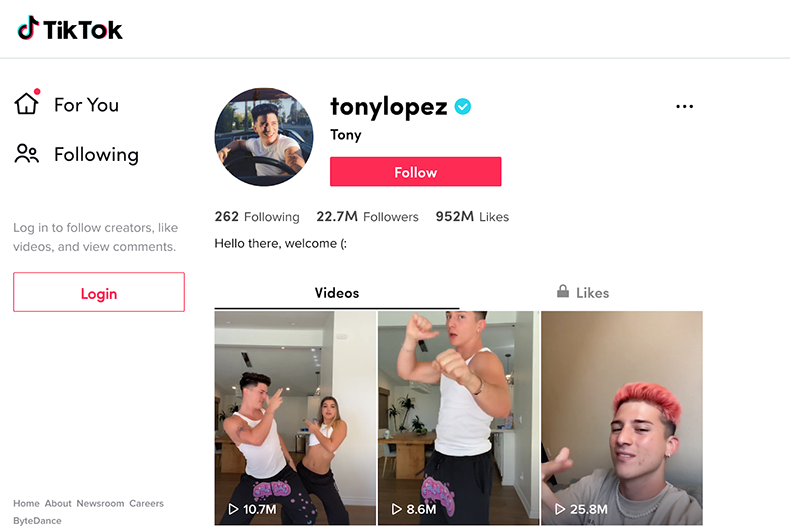 TikToker Tony Lopez has over 22 million followers and 952 million likes despite the fact that he admitted to sending inappropriate messages to minors online.

If you know anything about Gen Z’s relationship with its media stars, you have probably heard about cancel culture. Cancelling a creator is a way of calling her out for something offensive or hurtful she has done. The reasons content creators get cancelled tend to have to do with racist, misogynistic or homophobic remarks or actions they have made or done. Getting cancelled does not, however, mean the creator is literally erased from the internet. That would be impossible. When a creator gets cancelled, it means that fans unfollow the creator, start hashtags in an attempt to spread the word about what the creator has done and ask the creator to apologize and acknowledge that what she did was wrong.

Some celebrities that have been cancelled include Jeffree Star, a makeup artist and entrepreneur; Lana Del Rey, a singer; and even Jimmy Fallon, a talk-show host. Even though these stars are still working and still enjoy lots of popularity, their cancellations resulted in a loss of followers — and influence — online. Unless they have done something egregious, bigger celebrities can usually move on from being cancelled. The more impactful cancellations, though, are targeted at influencers, people whose only platform is social media and who rely on social media as their main source of income.

Cancelling as a form of justice isn’t perfect. Much has been written about how cancel culture can go too far. There are also times, however, when cancelling isn’t enough.

One social media influencer who cancelling wasn’t enough for is Tony Lopez, who has 22.7 million followers and 952 million likes on TikTok. Lopez’s feed consists primarily of dancing along with some comedy as well. In early August, Lopez admitted to sending sexually explicit messages to minors on Snapchat and Instagram.

Lopez’s offences are more than cancel-worthy. He does not deserve any type of platform, especially one that so many young kids have access to. Yet Lopez still has millions of followers, which leaves me and many others wondering why.

In his apology tweet, Lopez tried to defend himself by saying that he is “new to the entertainment scene” and that his actions “were extremely irresponsible.” Lopez’s apology was as standard as possible, trying to blame his problems on the fact that he is young and makes mistakes. What was unusual to me, though, were the reactions of his young fans. The fans responded to him by saying things such as “mistakes happen” and “forget about the haters, they are just jealous of you.” His fans accepted his apology and didn’t blink in their support of Lopez. Shockingly, in the two weeks that followed Lopez’s apology tweet, the number of Lopez’s followers grew from 22.5M to 22.7M.

Lopez’s followers generally fall in the age range of 9 to 13 years old. Kids in this age range are too young to understand the seriousness of his actions. On a comeback post that Lopez put up soon after his apology tweet, his followers posted comments like “Omg!! I’ve been waiting for you to post more videos…” and “Yesss! Tony, we love you!!” Most of the kids writing in the comments section seem to be indifferent to Lopez’s horrible actions.

When someone is cancelled, a group of people collectively decide to withdraw support for that person online. Every user has at least some control over what goes on in the comments sections and which content creators will get popular. And, when a creator makes a mistake, it is up to this mass of followers to demand justice. But how is it possible for 10-year-olds to demand this? We can’t depend on 10-year-olds to take on the responsibility of being the police of the internet and deciding who should and shouldn’t have a platform.

I think that Lopez’s account should be banned from TikTok, and I think TikTok as a whole needs to take charge by banning sexual predators like Tony Lopez. Other major companies such as Facebook, Instagram and Twitter need to regulate the types of people that have platforms on their sites as well. I’m not suggesting censorship, which would appear to most as a way to impair freedom of speech, but steps do need to be taken to monitor these sites. If more problematic influencers have their platforms taken away, then we will be able to teach impressionable children that actions similar to Lopez’s are unacceptable.