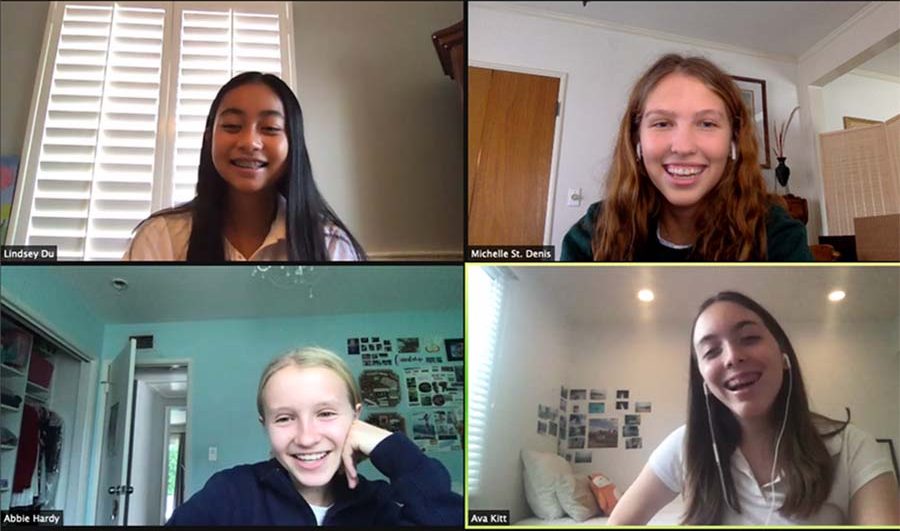 You’re a freshman, and before you turn on your laptop to join Zoom for your very first day of high school, you organize all your books and papers for the 10th time, making sure everything is perfectly set. Then you spend the whole day going through first-day introductions and chit chat about how summer went, wondering all the while how, as a new freshman, you’re going to make friends.

For Lindsey Du, Ava Kitt and Abby Hardy, all members of the class of 2024, making new friends online is their reality. Gone are the days of looking for friendly faces at lunch, making conversation by lockers and searching for someone to sit with on the bus after school. In the world of remote learning, new freshmen have to get creative.

But who better than Gen Z to figure out how to use technology to make new friendships happen? Turns out, a little bit of Instagram and a little time in a Zoom breakout room can go a long way.

Lindsey Du: The breakout room is the key to success

Du is a new addition to the freshman class who enjoys spending her time playing volleyball and hanging out with her two sisters (including Caitlin ‘22). Du says that she has been able to make friends in part because of the time she spends getting to know her fellow Tologs during class.

“What really helped me was getting to know my classmates using the breakout rooms in English,” Du said. “My group would always finish early, and the conversations I had with my classmates felt very natural. We talked about TikTok and social media and what’s going on in the world and in our other classes. I found out we had a lot of things in common.”

In breakout rooms, Du was able to get a sense of what her classmates were like.

“I was able to really get a feel for them and their personalities. I mean, the girls I talked to seemed really cool, and I kinda just knew we would be compatible by the way they acted, especially when we all laughed at the same jokes and expressed similar interests, morals and beliefs.”

Du then got ahold of phone numbers through Instagram and from the freshman class roster page, and she now corresponds with her new friends regularly.

“We mostly talk about school and homework, but other than that, we try to make plans to meet up.”

Du feels her friendship with Isabella Paz ’24 in particular has really begun to blossom since their first encounter in a breakout room.

“We were all talking about our favorite TikTok stars, and the name Chase Hudson was brought up, who I seriously don’t like. I thought everyone agreed until one of the girls, my friend now, was vocal about her distaste for him. Turns out we both prefer Cole Alves, who is far superior. He still is a topic in our conversations today.”

Besides their shared TikToker obsession, Du and Paz have continued to correspond about school-related topics.

“We text about almost anything. It goes from talking about Mr. Lau’s new hair color to school-related topics like our schedules and what clubs we are going to join. It’s nice to know that if we ever have to choose partners for class, I can count on her. It also doesn’t hurt to be reassured from another person that the Zoom meeting really has not started and it’s not just you.”

Hardy is a new student from Sierra Madre who has been selected for this year’s Freshman Board. She can’t wait to start planning ways for her classmates to bond. She’s considering organizing activities like an online scavenger hunt and freshmen-only (no teachers allowed) Zoom meet-ups.

Over the summer, Hardy joined an Instagram group chat started by a classmate who had searched for Instagram bios that included “FSHA 2024.” In this group chat, Hardy and her future Tolog classmates talked about their concerns, questions and overall excitement for the upcoming school year.

“The group made me feel accepted and just so excited to start school and make friends,” Hardy said.

Hardy has continued messaging with these new friends on Instagram, where they offer encouragement not only about school but about daily life.

“One time, when I cut my hair, this girl [Maria Boutros ’22] dm’ed me, saying my hair looked so cute, which was super sweet.”

Because of COVID, Hardy has yet to meet her new friends in person.

“I’m still quarantining, and it has been hard. But I feel like not a lot of girls are meeting up anyway, so I’m not alone.”

Hardy is aware that getting to know someone online is different than it would be in person.

“It’s interesting. I was talking to this girl [Lilly Venne ’24] about how we don’t know what we look like because we only see each other on Zoom. She said that she is actually really tall, and I’m really short, so I thought that was really funny because no one actually knows those things on Zoom.”

Ava Kitt: What better way to make a friend than to bake some pie?

Kitt is a freshman from Toluca Lake who spends her hours letting her creative juices flow by writing movie scripts and short stories about her teenage years. She also loves watching indie movies (when she is all done with her homework, of course).

“I met a friend through Instagram. She reached out to me first, and I just really appreciated how forward she was. We didn’t actually have too much in common at first, but we both enjoyed listening to what the other had to say,” Kitt said.

It was not long before Kitt and her friend, Miya Maloney ’24, planned to meet up in person for the very first time.

“We had been messaging back and forth for about a week. Then, I popped the question, asking her to come over. We didn’t really decide on what to do until later.”

Eventually, the two freshmen decided to make mini apple pies. Kitt had concerns about her ability to bake, but in the end, she decided to take a risk and go for it.

The pie-making process was a lot easier than Kitt initially thought it would be.

“With a knife, we cut circles in the dough and put the apple pie filling inside. With a fork, we pressed down on the edges for the last touch and put the pies in the oven.”

While the two waited for the mini pies to bake and cool, they decided to take a walk and get to know each other even more.

“We talked about how nice a lot of the teachers were, especially our French teacher, since we have French together. It felt nice to make a new friend. We have been trying to plan to hang out again, hopefully soon.”