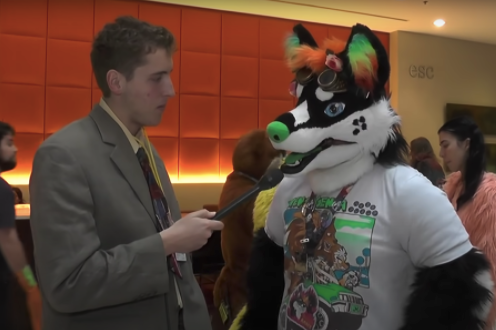 Screenshot from 'All Gas No Brakes'

Typical: A furry at the Midwest FurFest tells Andrew Callaghan about how he barks at the mailman.

In the middle of the desert, Andrew Callaghan, the face of the YouTube channel “All Gas No Brakes,” stands clad in an American flag shirt and holds a microphone. He interviews a man who, dressed in a light blue button-down with a camera around his neck, appears incredibly normal. They discuss aliens.

“How do you spot a human alien hybrid?” Callaghan asks.

“It’s the smell. They buy Axe at the grocery store because they think that’s what the human teens want,” the man replies.

Yes, this conversation is a real discussion Callaghan had on “All Gas No Brakes.” The interview appeared in his video about the Area 51 Raid that happened in 2019. Callaghan was one of the 100 or so people to show up to the raid. Surrounded by teens running around anime-style and middle-aged men discussing alien conspiracy theories, Callaghan asks questions to whoever is around, questions like, “What can we do now to avoid being enslaved by aliens in the future?”

Midway through the video, Callaghan talks with two bros, both of whom seem to be in their early twenties. One of the bros wears a muscle tank and a neck brace, the result of a failed attempt to do a backflip. The other has no shirt on at all. For some reason they have a toilet plunger. The bros explain that they can teach the aliens how to do a backflip but only if the aliens are willing to put in the practice. Later, Callaghan hears from some interesting characters about human consciousness and the possibility of aliens creating a “global dystopian technocratic peace matrix system” here on earth.

“All Gas No Brakes” appears on YouTube has over 1 million subscribers. From interviewing Antifa demonstrators in Portland to Burning Man attendees in Black Rock City, Nevada, Callaghan has been all across America. He’s traveled thousands of miles in an RV documenting and interviewing furries, flat-earthers, NASCAR fans and people from Florida. With all the wacky conventions and events he attends, Callaghan has come across quite a few oddballs.

Callaghan may cover some kooky topics, but Callaghan’s news coverage is a breath of fresh air. On YouTube, a lot of people do comedic man-on-the-street interviews. Funny questions and stunts by the interviewer are commonplace. When talking politics, often the focus in this type of format is on making an opposite political opinion seem dumb.

The type of man-on-the-street interviews that Callaghan does is not a new concept. But Callaghan approaches the people he interviews with respect. Rather than putting the focus on himself, Callaghan lets the interviewees speak. No matter how crazy the person he’s interviewing is acting, Callaghan is always respectful. He always manages to keep a straight face out of respect for the people with whom he is talking.

“If you’re interviewing someone and start laughing in their face, it feels [really bad],” Callaghan said in an interview with AV Club.

Although Callaghan’s videos are incredibly funny, comedy isn’t his true focus. His videos are a place to expose viewers to a whole side of life they never would have seen, and Callaghan doesn’t shy away from bringing his approach into politics. Callaghan has covered the BLM protests in Minneapolis and Portland. These videos are quite a bit different from his lighthearted and funny videos. He truly gets the inside scoop, interviewing people in the middle of the action. He has endured tear gas during the Portland protests and entered a looted store that was on fire in Minneapolis. He has provided a view on America’s unrest that’s unique from what I’ve seen on mainstream news channels like CNN and FOX.

Watching the mainstream news is often stressful, and I feel pulled in a million different directions. Instead of feeling informed, I end up feeling like the TV is arguing with me, trying to sway me in their direction. CNN and FOX’s constant references to and attacks on the “other side” can get exhausting. What I enjoy about the videos on “All Gas No Brakes” is that they have no argument. They are a presentation of what is going on and what people think, not a political campaign. Callaghan doesn’t try to glorify or demonize the individuals he is covering. He simply lets them talk. He doesn’t insert his opinion anywhere ever. He presents an objective and unbiased view of what he’s seeing.

Being an independent creator on YouTube, Callaghan is free to report how he wants. His videos feel honest. In his more serious videos, Callaghan pieces together a balanced story and presents a realistic view of what is going on. In his coverage of the BLM protest, he lets anyone who is willing to speak say what they want. He wants people’s voices to be heard. In fact, in the Portland Protest video, clips from right leaning and left leaning news channels were included. The contrast between what the biased stories they were telling and the unfiltered footage “All Gas No Brakes” recorded was arresting.

After watching an “All Gas No Brakes” video, I feel like I’ve been let in on a secret, like I’ve seen a side of America very few people ever have or ever will. Callaghan makes me feel closer to my country. While mainstream media criticizes and analyzes, Callaghan celebrates the peculiar beliefs and misfits that make America the country it is.