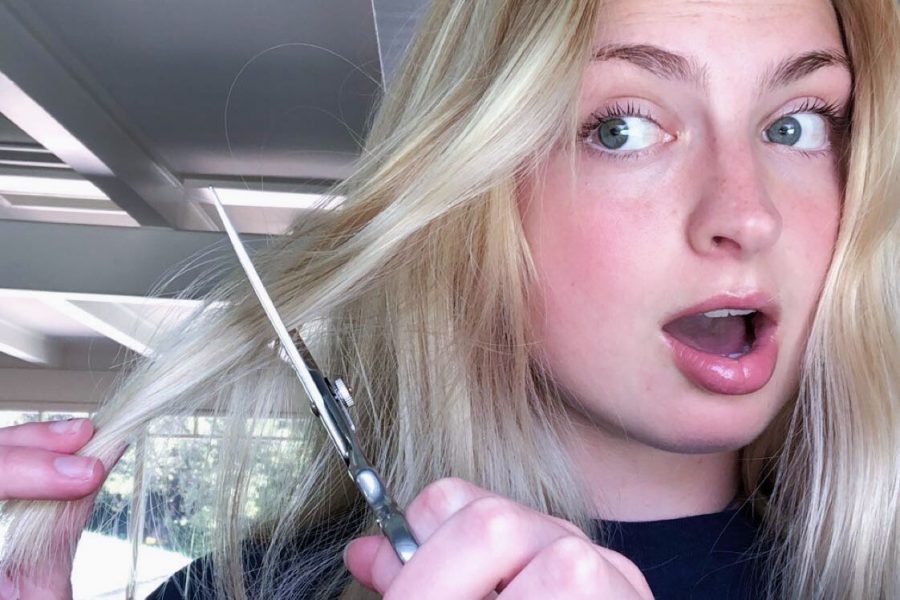 In observation of the advice issued in the 1994 indie classic, "Cut Your Hair" by Pavement, the author decided to occupy herself during quarantine by, well, cutting her hair.

Today is May 16, the end of week nine of quarantine, but who is really keeping track at this point? Do we even know what day it is? Who knows? Whatever the case, now seems like a good time to take a trip down memory lane and reminiscence about the first week of quarantine.

On a somewhat normal and mundane day, I was sitting in my room, bored and tired of the many hobbies that I had tried to adopt for myself, such as painting, embroidering and even interior designing (if that’s what you can call rearranging your room five times in a row). So, what did I decide to do? Well, I decided to bleach my hair, of course, just as any logical and sensible person would. I was striving for beautiful, silver, Elsa-like, ice-queen hair. And what did I get? Yellow, straw-like, dead, dry hair. This very well could have been due to the fact that the bleach that I used said, “DO NOT USE BLEACH ON PRE-LIGHTENED HAIR,” and, of course, my hair had already been bleached multiple times.

But the labels did not stop me! (By the way, I do not recommend this at all. Please follow the labels on chemical products; they are there to avoid disasters of the sort that befell my hair.) After discovering the somewhat traumatizing and terrible result of my bleaching, I attempted to tone and deep condition my hair. Nothing was working. So what did I do? Well, I bleached my hair again! Yup, that’s right, I bleached it again! And with what, you might ask? With the same bleach that I used before, the one that was not supposed to be used on pre-bleached hair! And why did I do this, you might ask? Well, it was the only one that I found online (I am assuming that many others had the same idea as I). Luckily, however, this time the bleach sort of worked out in my favor. I was left with lighter, whiter hair, as I had hoped. But, I was also left with damaged, dry and crusty hair. All the deep conditioners and serums in the world were not gonna help the straw on my head.

Given the horrific, cruel insanity I’d inflicted on my treasured locks, there was only one thing to do: chop the ends off. I woke up one morning, a few days after the second bleaching, and decided that I could not deal with the hair that I was living with. I consulted my mom on the subject of a cut, and let’s just say she wasn’t the most trusting of me.  She insisted that I buy shears for this monumental task instead of using the kid scissors that I bought from Target five years ago.

Being the resourceful and responsible daughter I am, I quickly searched Amazon and bought the first pair of shears that I saw. They were Prime with next day shipping. It was a sign! I was meant to cut my hair. But when the scissors arrived the following day, I excitedly ripped open the box (saving the cardboard for my regatta boat, of course) to find two-inch shears. Yes, two-inch shears! I looked at them and thought, “This can’t be right! Did I miss something? Have all my hair stylists been using incredibly tiny scissors all this time?” As I inspected the packaging more closely, I discovered that these were eyebrow shears. Now, I am not really sure who is the target audience for eyebrow shears. I mean, hey, maybe me? But what was I supposed to do with these things? I have no idea, so if anyone ever needs tiny shears, I got you. They are still in the packaging.

Now someone sensible may have seen this mishap as a sign not to cut off all her hair. But to me, this was merely a speed bump in the process. So, I hopped back onto Amazon and found a different pair. This time I made sure to read the dimensions before pressing “Buy with One Click.”

A couple days passed, and my shears finally arrived. At this point, I was beyond eager to cut my hair. There were no shreds of doubt in my mind. After this lengthy process, I was determined to make things work. So, just as I had done the first time, I ripped open the box with excitement, and this time, I luckily found HAIR shears. I was overjoyed! I ran to my laptop and searched, “hair cutting tutorial.” I picked the first one I found and ran with it. The process seemed simple enough: put your hair in sections, put those sections in rubber bands and cut away. And that’s exactly what I did.

Looking back on it, I may have been a bit hasty with my decisions. If you want to cut your hair during quarantine, I would recommend doing a bit more research than I did. But nonetheless, I was beyond happy with the results of my cut. I felt like a brand new person, and this was a very positive change from the draining moments of quarantine.

Quarantine may not seem like it should be a draining experience, but it is. I think that it takes a lot of effort to be with yourself all the time. There is no escape with friends and adventures in the outside anymore. This type of isolation can make you feel crazy sometimes, and sometimes you just have to do something crazy to combat that. So do it! Cut your hair! While it may be scary in the moment, the sense of relief afterwards is priceless. Not to mention, you get an awesome new look, which is hard to come by with no salons open. And, if you don’t like what you wind up with, hair grows. We’re in quarantine; no one is going to see you out and about and judge your haircut.