With all my love (and much Tolog pride), Em 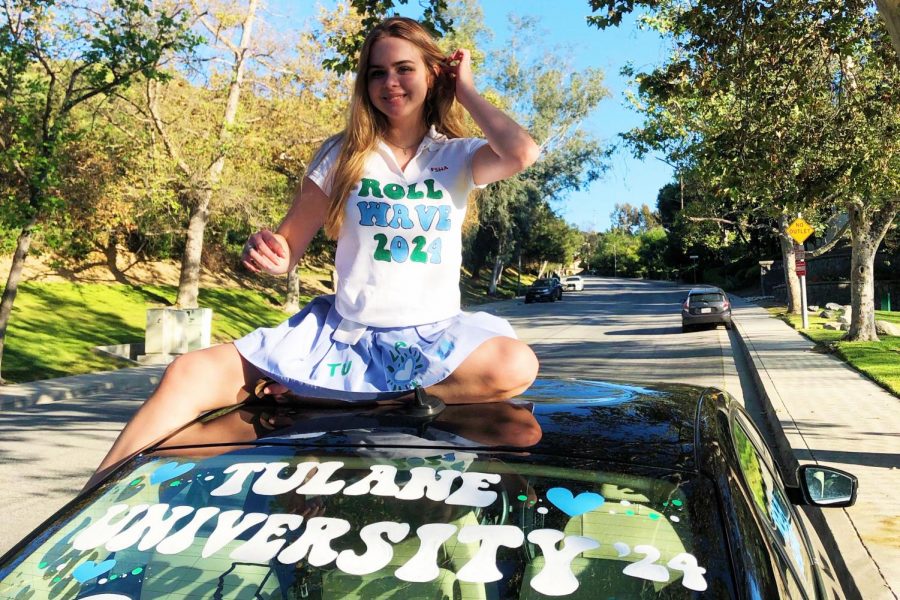 After staying up late to paint her car in the dark, the author is ready for the senior car parade.

Never in a million years did I think I would be saying my goodbyes to the Hill from behind the wheel of my car, but there I sat, the heat scorching, my air conditioner on the highest setting. Pitbull blasting from my speakers. Hands shaking. Intense wailing punctuated by deep, heaving breaths. Intense belly laughter ringing out in response to the jokes shouted from driver’s side windows. Car horns honking from every possible direction. Our beloved parking attendant, Iggy, in a sombrero, leading a conga line of vehicles around the familiar twists of St. Katherine Drive.

Allow me to backtrack. Tuesday, May 5, 2020, was intended to be an opportunity to provide current FSH seniors with some semblance of tradition as we begin the process of bidding farewell to the hill that we’ve spent the past four years laughing, loving and learning atop. As freshmen, sophomores and juniors, we proudly (and slightly enviously) watched our older Tolog sisters decorate their cars and polos, and on Tuesday, our time had finally arrived.

To prepare, we seniors labored over our cars and old uniforms, covering them in Sharpie and paint-pen doodles that refer to the places that will define the next chapter in our lives, our future colleges, or to pay homage to our deeply loved Sacred Heart. But instead of sandwiching our cars together on senior lot, given the tragic pandemic that has taken hold of our world and stopped daily life in its tracks, the class of 2020 assembled for one final, collective salute: a car parade.

Initially, this idea vexed me. I wondered why we would try and alter a tradition that was so irrefutably great in its original state — it felt like an unfair reminder of all that we were missing. But, I have a confession: I’m a sucker for arts and crafts. So any excuse for me to pull out my box of acrylic paint or hear the metronomic movement of the metal ball inside a shaking paint pen is good enough for me.

The night before the parade, I set up camp on my front lawn and went to town, covering my barely worn white polo and light blue skirt with various scribblings of “Roll Wave” and “Tulane” and “2024” among my signature lopsided hearts. The car was an even more ambitious endeavor. A delayed start left me painting my beloved Jetta well into the night, as I crawled on top of the trunk and was eaten alive by mosquitos. I didn’t even finish the car until Tuesday afternoon, after classes, and I regret to inform everyone that I have now acquired a blindingly pink, first-degree sunburn in addition to the bites from the aforementioned mosquitos. But the moments of discomfort were all well worth it to produce a visual representation of my already-intense college pride, and one that I was able to share with the people who helped me get to this point in my life. When I finished, I dashed inside, covered in paint. I showered and decorated my eyes with green gems and slipped on my uniform one last time.

I made my way up the Hill, zipping around the curves until I found myself idling under the bridge, staring at the decorated car in front of me. I suddenly became overwhelmed with emotion. I don’t know what got into me. I turned up my radio to drown out the sound of my sniffling, alternating between famous anthems from Mr. 305 himself (also known as Pitbull, to the layperson) and trying to dance instead of cry. As the car line slowly crawled to senior lot, the site of our first lap in the parade, I watched the classmates who were ahead of me in line fly by while coming back down the road, windows down, some crying and desperately trying to keep their makeup from running, some laughing and shouting “I love you” at the friends they passed. Many were a mix of both.

Once in the lot, I dropped my parking placard into a box and said my first small goodbye to the Hill. I was greeted by Ms. Contreras, who gently placed my graduation gown in my trunk, and I subsequently handed Ms. Koemans my contribution to the class time capsule — a well-taped envelope, adorned with stickers and little drawings, containing an eight-page letter to myself and a plethora of pictures that documented some of the best days I’ve ever had — with a choked “thank you” that burned as it left my throat. I began to head down to junior lot, which is where things got more interesting. Time seemed to stop, and so did the car of my sweet friend, Elisa.

I’m not sure how or why this happened, but as I prepared to enter junior lot and slowly make my way past the people who changed my life as a high schooler, there was a sudden stop to the influx of traffic. Elisa’s car stopped as she attempted to exit the lot, rolling back a little bit and causing a brief moment of panic, especially for those in line behind her. The episode provided a flicker of comic relief (though probably not for her… Sorry, Elisa… I hope your car is okay…) during a moment in time defined by emotional heaviness. Our quick-thinking security team promptly addressed and ameliorated the situation, pushing the car into a vacant parking space while Elisa strapped on a mask and hopped in with Nicole to ride shotgun for the remaining duration of the parade. What can I say? Sisterhood blooms and flourishes in the least likely of situations.

Eventually, I was able to circle around junior lot. I saw colorfully decorated signs covered in kind words and congratulations, faculty members in their formal graduation garb, Mr. Badzey’s new yet already iconic, fire engine red hair, and faculty children, including two senior-class favorites, Dr. Sanderson’s astoundingly adorable sons, who have been instrumental in the live-streamed physics class meetings Dr. Sanderson has held as we build boats for another alternative to a classic senior tradition, The Physics Regatta: Home Edition.

I screamed “thank you”s that don’t even begin to express the gratitude I have for the teachers who wrote me the recommendations that got me into Tulane, where I will be continuing my academic career in the fall, and I shared tearful waves with the educators whose care and knowledge helped define my high school career and allowed me to grow tenfold, not only as a student but as an individual. After our first lap, we were granted the opportunity to make our way around both parking lots one more time, and I unsuccessfully attempted to focus on giggling and shouting my final words to the people who I will not see before I move nearly 2,000 miles away in three months. Tears were shed, but I could not help smiling. How could I not? I am so beyond lucky to have a place and a class that is so incredibly hard to say goodbye to.

It’s safe to say this parade was the best time I’ve had since the days before quarantine, when we were not all sequestered away in our homes. In just the past month, I’ve developed a profound appreciation for the hilarious moments we all shared together, day in and day out. The years were anything but mundane, and I can honestly say there is no place like Flintridge Sacred Heart, nowhere else where I would have liked to have spent high school. This hill and the innumerable, irreplaceable memories I’ve made atop it will always commandeer a vast space in my heart. Thank you to the teachers and administrators who made this — the car parade and everything before it over the past few years — possible. And, thank you to my Tolog sisters who showed up and contributed to the bizarre, boundless beauty of this experience (again, the parade and high school itself). I cannot wait to hug you all when this is over. Sko ‘logs and Roll Wave!

With all my love (and much Tolog pride),