You got this, Ferryn 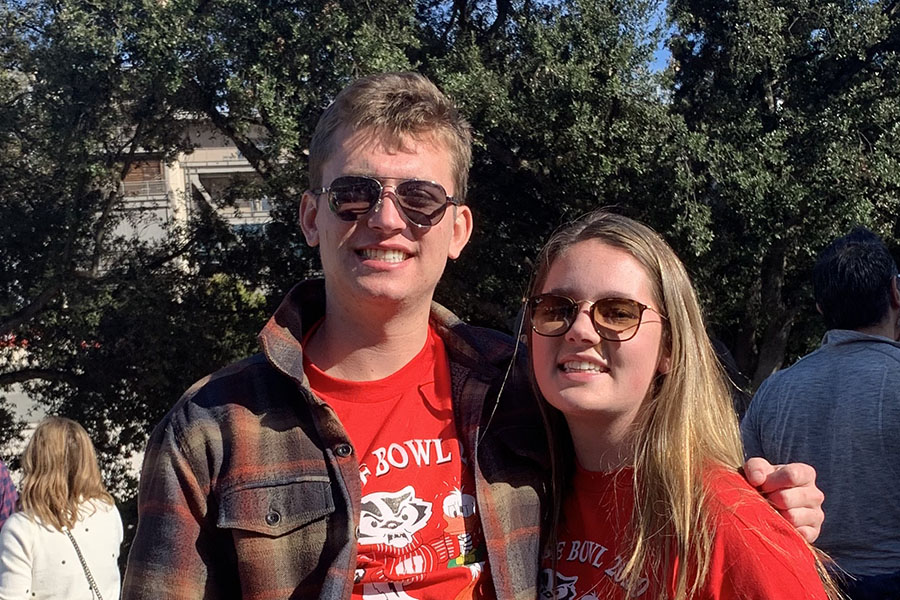 The author celebrates the Rose Bowl with her brother, Jaxon.

As the class of 2020 and I say our final goodbyes to the college process, I think it would be helpful for future college applicants of FSHA to hear about my unique experience, so that they can learn from it.

My college process actually began in the fall of my junior year. Initially, the plan was for me to commit to a smaller, Division III, academically elite college where I could play volleyball. After hours of editing film, hundreds of emails and lots of playing at schools, though, I didn’t find a good fit with the schools that were interested in me. So, I said goodbye to the idea of college volleyball and solely focused on schools without volleyball. While this was a hard transition, I was excited to know which way my future was headed and to give 100% of my effort to finding the best college for me.

My older brother, Jaxon, is currently a sophomore at the University of Wisconsin. I have always looked up to my big brother. He was an All-American and a national champion volleyball player in high school, he is very popular socially, he has always done well in school and pretty much everyone loves the guy. And, it would make my parents extremely happy if I were to attend the same school as him. November came around, and my mom and I decided to go out to Wisconsin for my brother’s birthday and for me to see the school. I had a great time in Madison, and Jaxon embraced me by showing me around, introducing me to his friends, etc. Leaving out the cold weather, Madison is a great town, and it seems like everyone who goes to the school loves it. However, I didn’t fall in love with the school. But even though I didn’t feel a pull to the school, I thought that if I were to go to Wisconsin, I would surely be happy.

Late December rolled around, and I received an application status notification for Wisconsin that read “Deferred.” For those who don’t know, if you apply early action for a school, you can receive an acceptance, a deferral or a rejection. If you are deferred, it means that you aren’t accepted or denied, but your application is going to be reevaluated with all of the students who have applied for the regular decision date. While this is technically not bad news, it is well known that it is much harder to get accepted to a school if you have been deferred.

Weirdly, I wasn’t sad for myself when I got this news, but I was sad for my family. Thoughts like “How am I supposed to tell them?” and “Are they going to be mad?” started to run through my head. Completely overcome with panic and anxiety, I got on the phone with a close friend, received advice from him about how to go about this and waited a couple of days to tell my parents. Their response was, “You have a brother at the school, you have great stats, you will get in.”

Then, on January 1, the tailgate of the century happened. With Wisconsin playing in the Rose Bowl and my family knowing a lot of other Wisconsin families, we hosted a tailgate that ended up drawing roughly 500 people (word got out quickly about it). For weeks after, almost every person I ran into in Pasadena told me that the tailgate was epic and asked me if I was going to Wisconsin. I responded with an enthusiastic yet sometimes fake, “Still waiting to hear.”

Whenever the topic of college was brought up in the house, it would lead to my parents talking about how I was going to go to Wisconsin. I would always try to talk about other schools, but my family didn’t care much about what I had to say. They loved the idea of my brother and me being together, which is hard to get mad at because I think that is every parent’s dream. In their eyes, Wisconsin started to turn into the only option. They would say things like, “Why would you consider that school? It is super similar to Wisconsin, so then why wouldn’t you go to Wisconsin?”

In my mind, going to college with my older brother was something hard for me to grasp. I have always felt like I have lived in the shadow of my older brother. More times than I can count, I have been thought of as Jaxon’s little sister. People tell me all the time that I am so lucky to have him as a brother. Never has Jaxon been looked at as inferior to me or as the lucky one. This has caused a rift in our relationship, completely by my doing. I have always been a bit envious of how people look at him. He is viewed as this perfect person a lot of the time, while he is human and has made plenty of mistakes behind closed doors. I have grown tired of living in his shadow. Even though there isn’t a guarantee that this would continue if I went to Wisconsin, I was ready to break the pattern. I was ready to go out on my own, be my own person and start the next chapter of my life, not as someone’s little sister, but as Ferryn.

But, I couldn’t work up the courage to tell my parents the whole truth about my disinterest. We would constantly get into arguments about whether Wisconsin was right for me. Soon, this issue started eating at me from the inside. I would go nights without sleeping, repeatedly getting sick, and I would avoid being at my house as much as possible. Only a few people knew what was going on with me because I was utterly embarrassed to tell some of my closest friends and family members the truth. After a few weeks of my mind and body taking a toll, I realized that my parents weren’t to blame for my change in behavior. Everything they have done and wanted for me comes from a good and loving place. My parents and I have a different idea of what’s best for me, and my side was ignored because I chose not to tell them that I didn’t see myself at Wisconsin. So, I finally had the big talk with them. I laid everything out about how I felt that I was hurting them because I didn’t want to go to Wisconsin and how I felt that they were hurting me. I told them about the agony that came from their ignoring my interest in other schools, and I told them that I was tired of feeling second to my brother. I truly can’t express how much of a weight was lifted off my shoulders. I finally started to get back to my normal mood, energy and overall health. My parents apologized for everything and told me that they wanted me to pick whatever school I thought would make me happiest, just like Jaxon did.

As the last two weeks of March were coming up — aka, the weeks when you hear back from colleges — I was feeling good. Everything seemed better with my parents, and Jaxon and I had developed a great relationship. Even though I still had hope, I pretty much got rejected from every college I expected to be rejected from. I was thrilled, though, to be admitted to a variety of schools, and my top two favorites were Penn State and the University of Washington.

All I had left to hear from was Wisconsin, and, eventually, I found out I was waitlisted. This news didn’t upset me at all because I knew that the school wasn’t right for me, and I had two great choices in my mind. My parents were upset when they heard the news about Wisconsin. They didn’t understand how someone with grades pretty much the same as her older brother, who was already admitted to the school, could continue to be pushed aside. While they went on and on, I was daydreaming and picturing myself in either Washington or Pennsylvania. After hours and hours of YouTube videos, Q&A’s and virtual tours (sadly nothing in person because of the virus), I realized that Washington was the best fit for me. It is not too far from home, it is close to a big city while still having its own campus, it has a climate I like, I have family thirty minutes outside of Seattle, and my grandpa was part of Washington’s football and the rowing teams. So I told my parents where I wanted to go, pressed the “Accept” button on the portal page, and ordered some gear online.

Even though my parents are really happy that I found where I want to be, they still are interested to hear if Wisconsin takes me off the waitlist, which is honestly fine by me because I know what I want. Again, how they have acted, the mistakes they have made, and the mistakes that I have made in this whole “college process” were all coming from a good place. I know, at the end of the day, my parents are proud of everything I have accomplished and genuinely trust me by letting me have the final word about where I am going to school. This trust means so much more to me than they will ever know.

So, to all the juniors and younger girls who have started to think about college, your parents might have a preference for where you go, and that is completely normal. Our parents have a different perspective about things, so it is important not to shut them out completely. Let them talk about a certain kind of school, major or place, because their voices matter, too. However, as I have learned, there is a fine line between having your parents help you find what you want and letting your parents shape what you want. Deciding where to go to college is probably one of the biggest decisions you will have made thus far in your life. This is a decision that takes time, research, work and, most importantly, patience. At the end of the day, you are the one who will be attending the college, not your parents, so make sure your voice is heard. Your parents want the best for you, and sometimes that can cloud up their judgment and treatment towards you. I am a big believer that everyone ends up where they are supposed to be, even if they don’t know it at the moment. So, as you start to research, learn, and talk to your parents about colleges, remember to take a deep breath, be open about your feelings and enjoy your time in high school, because it flashes by much quicker than you think.