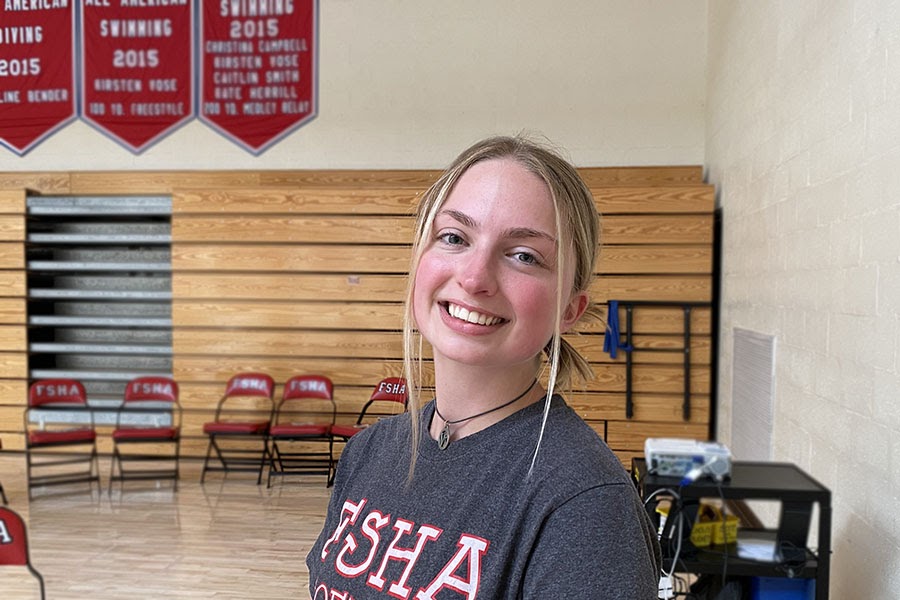 Elle Nawrocki '20 is all smiles as she waits to cast her vote in the November elections.

She gets home from school and hops on the couch immediately to watch the debate. She watches carefully, because she cares about actually understanding the candidates’ beliefs. After the debate, she goes to bed. She wakes up in the morning and opens up her phone. She looks at the Top Stories section in Apple News and opens up an article from The Washington Post discussing the results of the debate.

Elle Nawrocki ‘20 is one of the seniors who will vote for the very first time this coming November. But, while there are many other first-time voters on the Hill, Nawrocki’s development as a politically involved person is a special one. She has not always been involved in politics, but she became more interested when she knew she would be able to cast her vote in the 2020 presidential election.

“My beliefs became more concrete last year, because I knew that I would be voting soon,” Nawrocki said.

Eager to vote, she pre-registered when she was seventeen.

Nawrocki has multiple ways of keeping up with political news and forming her opinions.

“I watched the debates with my mom a lot. I am also in a government class, where we focus on a lot of current events, so it is easier to stay up to date with the candidates,” Nawrocki said.

While watching the debates, Nawrocki liked to focus on a few key aspects of each candidate.

“I really looked for confidence in their views, because if they are shaky, how are you supposed to trust them to plan anything when they are in the presidency? I also think it is important how they rebut arguments and carry themselves,” Nawrocki said.

When it came time for Super Tuesday, Elle had chosen a candidate who she felt could incite fundamental change.

“I voted for Bernie Sanders in the primary, because he is for universal healthcare. He is a big advocate for environmental issues, and I feel that the environment is an important topic in today’s society because of climate change. I think he is going to make the biggest impact on my generation’s future, and he is leading for a change in a way that I didn’t think a lot of the other candidates were,” Nawrocki said.

Elle was not always sure she would vote for Sanders, but as time went on, she leaned more toward him.

“Biden is not concrete in his ideas, and the debates turned me away from him. In the beginning, I was leaning more towards [Biden], but as time went on, I was not as confident in his ability to change our country,” Nawrocki said.

Nawrocki’s parents are proud of their daughter for engaging in the political world.

“As parents of a new voter, we are proud of the approach Elle has taken to her voting responsibility. She has researched both local and national topics. She also has spent the time to craft her own positions, rather than just copy the voting patterns of her parents. Go Gen Z! She and her peers are shaping our future,” Laura Nawrocki said.