Salt and Straw reimagines ice cream. But is that good? 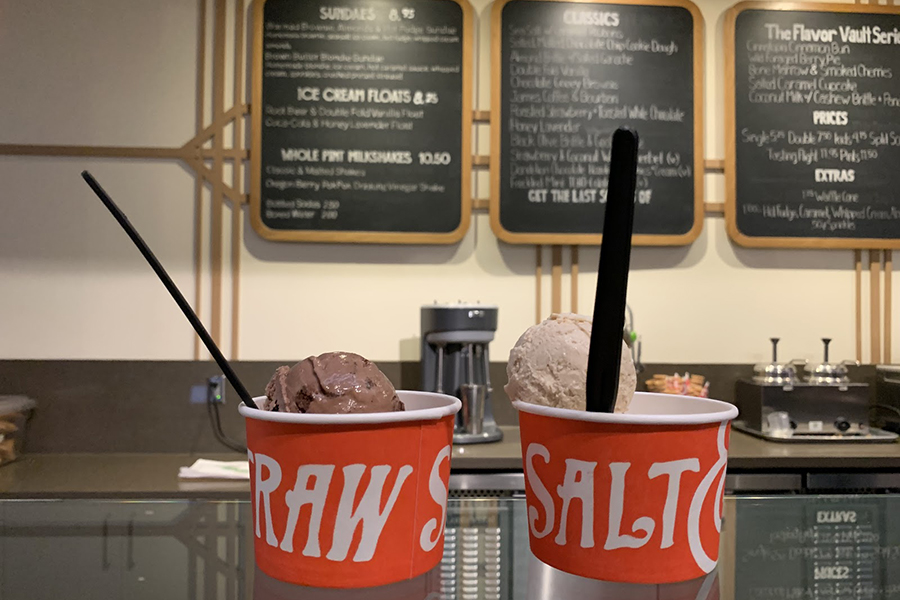 Two of Salt and Straw's special scoops sit on the counter, ready to be consumed by a hungry hipster.

As a Pasadena local, there are few things that define my childhood more than 21 Choices. I remember patiently waiting in the long line that circled around the block to finally reach the counter and stand on my tippy toes to order my chocolate ice cream with Oreos, chocolate chips and brownie bites on top. As I have grown older, though, my palate has become far more refined, and I have become less interested in the sugar-coma-inducing flavors of 21 Choices and more intrigued by the process of dissecting the richness and texture of sophisticated scoops. I was ecstatic when Salt and Straw announced that it was opening a location in Old Town because not only would I have yet another ice cream shop to frequent but also Salt and Straw is a popular name in the ice cream world, and I was very excited to have a location in my own neighborhood.

For those of you who are not familiar, Salt and Straw is an ice cream shop that prides itself on its unique flavors. While some of its flavors are just reimagined classics — salted, malted chocolate chip cookie dough; chocolate gooey brownie; freckled mint TCHO-colate chip — other flavors, like cranberry stuffing and bone marrow with cherries, are extremely random and, frankly, just gross.

It is understandable that Salt and Straw makes these flavors because they evoke discussion, whether positive or negative. But what possesses someone to order a flavor like bone marrow with smoked cherries?

Although I tend to avoid such flavors like the plague, I knew that for the sake of this review I was obliged to head down to my local Salt and Straw and test some of these flavors out for myself.

Fortunately for my taste buds, bone marrow with smoked cherries was not on the menu when I went. The most exotic-sounding flavor I could find on the menu was Twenty-Four Blackbirds’ cardamom black pepper and port truffle, which, from across the glass, appeared to be a swirl of chocolate set against a base of vanilla ice cream.

From the name, I anticipated tasting a subtle hint of pepper throughout, the richness of a decadent dark chocolate truffle from Twenty-Four Blackbirds (a chocolate store in Santa Barbara) and the warmth of the spice cardamom. The jam would add a sweetness that would perfectly balance out the spice. A powerful vanilla would provide the perfect backdrop for the different flavors and textures of this smooth, sweet and adventurous scoop.

My expectations were too high. What I thought would be a subtle touch of pepper throughout ended up being chunks of inedible raw pepper every so often. The feeling of biting into what has the texture of a sugar cube and not tasting sugar was not an enjoyable experience. I separated the chunks to the sides of the paper cup with my spoon, and I analyzed each bite neurotically before I put it into my mouth, ensuring that I had not missed a chunk. The bits of supposedly high-end chocolate tasted like chalk and left a thin film on my tongue. A stream of reddish jam pervaded the entire scoop. The jam was bitter and tart and tasted like the raspberry sauce you would find on a piece of cold chocolate cake at a convention center dinner. The pepper chunks didn’t mask the jam but rather clashed with it, creating a peppery, sour-sweet taste throughout. The vanilla ice cream, meanwhile, lacked a strong vanilla extract smell (something a great scoop of vanilla ice cream always has), and any flavor in the vanilla could not be detected among the pepper and jam.

I didn’t expect to love this complicated ice cream concoction, but I expected the experience of eating it, the anticipation and my reaction to the first bite, to be at least worth its price. Salt and Straw thought it could take a basic scoop of vanilla ice cream, throw in a tacky-tasting berry sauce, some overpriced chocolate and a shaker of pepper and fool me, an ice cream expert, into thinking I was paying $5 for the pinnacle of creativity.

As I mustered up the courage to take another bite of the ice cream, I thought of how this underwhelming scoop could be fixed. Maybe if the jam were more refined-tasting or the pepper were better proportioned throughout, the taste wouldn’t be so confusing. But, even with these changes, I don’t think this scoop would be fixed. What needs to happen is the elimination of everything extra on this scoop of ice cream. Cut the confusing, unpronounceable, eight-letter name and the tacky berry sauce and stick to a high-quality vanilla ice cream.

Sometimes when something hasn’t been done before, there is a reason, and that reason is that simple is just better. Mint chip may be basic, but it’s a tried-and-true flavor. Of course you can elevate a basic chocolate ice cream into a flavor like chocolate gooey brownie, and Salt and Straw does a great job at this. They just need to stop wasting time developing gimmicky BeanBoozled-esque flavors and start marketing themselves with their truly appetizing scoops.