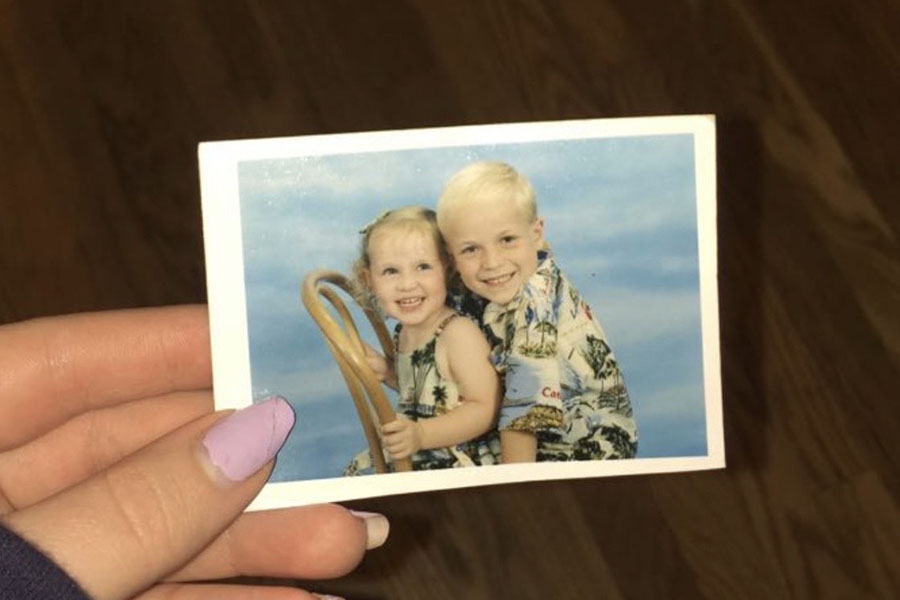 The author and her brother in their favorite Hawaiian shirts.

For those who do not know me, my family dynamic is unusual. Two of the biggest pieces of the puzzle are the fact that my sister, Becca, has Down syndrome and my brother, Will, has cystic fibrosis, a disease that causes mucus to build up in the lungs. My whole life I’ve grown up knowing that my siblings will not be living normal lives. That, I’ve always known. I have, however, always had lots of questions that I’ve been too afraid to ask.

My family has been open about my siblings’ health situations. Like, if my brother was ever hospitalized (which was a rare occasion), we would have loads of people willing to watch my sisters and me so my parents could have a break. My family also chairs the Hook the Cure Tournament, which benefits the Cystic Fibrosis Foundation. The foundation raises money in an attempt to find a cure for cystic fibrosis. In these ways, my parents have never been shy about what was going on with us.

Despite my family’s openness about CF, however, I have always been apprehensive about asking certain questions, especially when I’m talking to my brother.

I had spent my whole preteen phase stressing about asking the right questions instead of opening myself up to a conversation, a conversation that my family would have been more than happy to have. I felt as if I knew everything there was to know about CF, but, lo and behold, I was actually surrounded by my lack of knowledge of the CF world. My preteen phase consisted of acting as if I knew every single fact about cystic fibrosis even if, realistically, I was totally clueless.

Part of my cluelessness had to do with the fact that I am the most emotional person ever. There are hard questions that have always been on my mind that I have never wanted to ask, because I am afraid of the response, afraid of the words that would tell me how long my brother has to live. I have been able to ask my brother more questions now that we are older, and I sometimes have my emotions under control. But there is still that giant question looming over me, and I am still unable to ask because I am still afraid.

In my defiant preteen stage, I had close to no idea what CF was outside of how the disease affected my brother. In 2019, though, when “Five Feet Apart” came out (more on that later), I started to research the disease with a simple Google search of the basic definition of CF.

The Mayo Clinic describes cystic fibrosis as a disease that “causes severe damage to the lungs, digestive system and other organs in the body. Cystic Fibrosis affects the cells that produce mucus, sweat and digestive juices. These secreted fluids are normally thin and slippery. But in people with cystic fibrosis, a defective gene causes the secretions to become sticky and thick. Instead of acting as a lubricant, the secretions plug up tubes, ducts and passageways, especially in the lungs and pancreas.”

Then, as many Gen Zer’s might expect, YouTube figured out what I had been Googling, and a CF-related video popped up on my recommended feed. It was a YouTuber’s reaction to the first trailer for “Five Feet Apart,” which is a movie about two kids who both have CF. And that’s how I discovered Morgan, better known as Cystik1. On his channel, he discusses CF and his personal experiences living a life with CF.

The channel, which has stacked up over 64,000 followers, gained a lot of attention because of Morgan’s “Five Feet Apart” trailer reactions. The first reaction took place while Morgan was hospitalized for reasons he didn’t disclose to his audience. In his video, with a heart monitor in the background, Morgan talks about CF-related things that he hoped the movie would include, such as hoping that a character would have a port on her chest for the easy insertion of IV tubes. When Morgan saw that the main character in “Five Feet Apart” had a port, Morgan was immediately filled with joy, and his sudden joy made me excited to see the movie.

“Five Feet Apart” is a movie that covers the love story of two teens who have been diagnosed with cystic fibrosis. Think “The Fault in Our Stars” with a different (but still terrible) disease, and instead of being next to each other for every single minute, the main characters stay five feet apart. The title of the movie, which stars Cole Sprouse and Haley Lu Richardson, refers to the fact that every person diagnosed with CF has her own bacteria, which means that if you have CF you must remain six feet apart from another person with CF at all times, because any transfer of the bacteria between two CF patients can result in death. In the movie, the two main characters defy the rules and decide to stay five feet apart.

“Five Feet Apart” grabbed my attention, because obviously my family was stoked to see there was a movie coming out that featured CF. What we weren’t expecting was that Cole Sprouse’s character would be named Will, just like my brother.

I ended up going to the opening night of “Five Feet Apart” at the Regal UA in La Canada with one of my best friends. We were two of seven people in the theater, which was quite sad. The lights dimmed and the movie started (I promise I won’t spoil anything!), and throughout the whole movie, hearing my brother’s name almost made it hard to watch. While his case of CF is not as bad as others, I couldn’t help but imagine that the main character was my brother. I, of course, spent the whole movie crying, and I spent the rest of the night sobbing as well.

One of the biggest things that ticked me off about the movie was the fact that it got much less hype than “The Fault in Our Stars.” If you compare the hype between “The Fault in Our Stars” and “Five Feet Apart,” you’ll see a drastic difference. I don’t understand why. Is it because everyone seems to be a sucker for a romantic cancer movie? Or because they didn’t know what cystic fibrosis is?

I was at least glad that Morgan brought some hype to the movie and gained a bunch of well-deserved subscribers. And, I was glad to have the opportunity to text my brother. But, as soon as I was going to press send, I realized he was in Australia, and the movie was not out yet over there. So he was unable to see it for a while, and our new bond over “Five Feet Apart”  would have to wait.

Back in October, the FDA approved a new drug called Trikafta that could benefit many members of the cystic fibrosis community. This new drug combines three different types of medicine that can aid in the function of cystic fibrosis patients’ lungs. Trikafta, however, is not a cure.

Through Morgan’s channel, I was able to learn about this new “miracle drug” for people with cystic fibrosis. Good RX states that Trikafta is able to treat 90% of the CF community while an older drug produced by the same company only treated 6% of the community. Trikafta gives people with CF a chance to stay alive until somebody finds a cure. Trikafta also benefits those who previously had no options for treatment. Trikafta, according to the FDA, is the “first triple combination therapy available to treat patients with the most common cystic fibrosis mutation.”

Morgan got on Trikafta in November 2019. My brother got on Trikafta in January of this year. On Morgan’s channel, I witnessed some of the side effects through his videos. A major side effect was needing to get his gallbladder removed. However, Trikafta has allowed numerous patients, including my brother and Morgan, to have their highest lung function results.

Seeing Morgan’s journey with Trikafta made me more confident when speaking to my brother about it. He now throws medical terms at me, and I sometimes understand them, and most times I don’t, but he picks up on my lack of knowledge and breaks down certain things to me. Having spent time watching Morgan and reading about CF online, I feel like I have some knowledge about a medical topic that I can openly speak to my brother about.

While the giant questions, like how long my brother has to live, still linger in my mind, the questions I have been able to ask have turned into conversations with my brother, conversations that I have learned he is happy to have, one sibling to another.