I stand with Tyler Brash 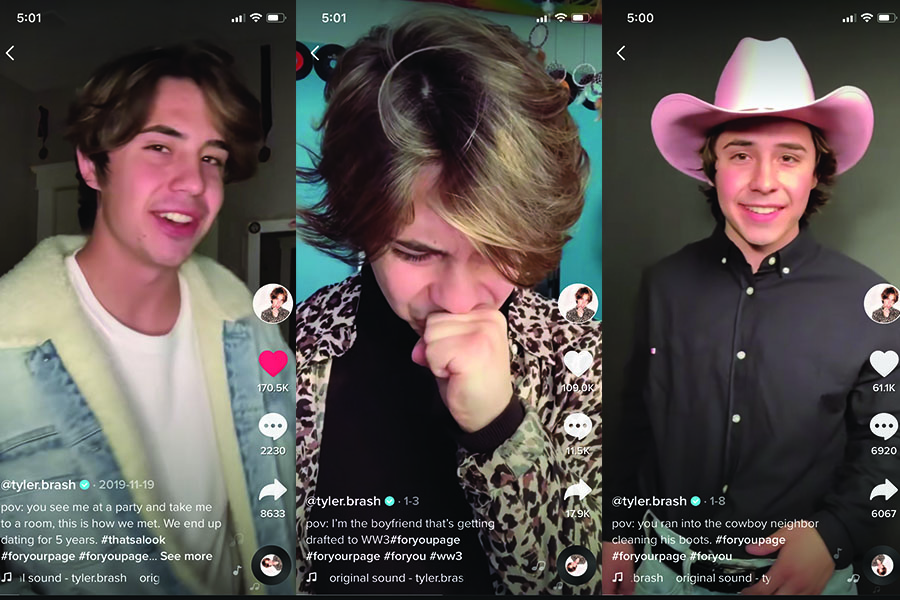 If you’ve ever been on TikTok, I guarantee you’ve come across at least one of Tyler Brash’s “cringey” point-of-view videos.

It’s surprising the amount of hate this revolutionary ‘Toker has received from so-called comedians online like YouTuber Cody Ko and TikToker Max Dressler. Many have been fooled into thinking he is just some cringe-worthy, try-hard pretty boy that makes bad POV content. But no. No. He is so much more.

My first encounter with Tyler was a video captioned “pov: you see me at a party and take me to a room, this is how we met. We end up dating for 5 years.”

So, you are in a room, apparently. Lana Del Rey plays, muffled in the background. An average-looking white boy with medium-length brown hair walks in and closes the door, hands in the pockets of his sherpa jean jacket. It’s Tyler. He approaches you and asks why you’ve brought him in here. He answers his own question: “To tell me I’m hot? Wait, look at you! You are way out of my league. My hair’s all messy. I’m wearing a thermal… thanks? But you’re way hotter…” He then tells you that he broke up with his girlfriend two months ago, and you proceed to ask him to make out with you. He smiles: “You want to make out??? Uh hell ya!” and the camera cuts as he leans in.

Only the elite understand and recognize that he is hyperbolizing the ridiculousness in typical ‘Tok POVs. This POV specifically is a perfect example of Tyler throwing his audience a clue with the “thermal” line, letting everyone in on the fact he’s trolling. He is not just a pathetic boy alone in his room talking like a frat boy and pretending he is making out with his phone camera. Honey, this is performance art.

If you were in on the joke, you would praise him like a god, as I do. Tyler Brash is playing a character. I’m not talking about the different characters he plays in his POVs. He is method-acting as a kid who genuinely thinks his POV TikToks are good content — playing the role of someone playing a role. Brash is tricking you into wanting to cringe at him and making fun of you for believing for one second that he is serious.

The point of IYKYK (for you out-of-touch Millennials+, this means If You Know You Know) comedy is the elitism of it all, that the joke excludes and therefore humiliates all people who do not immediately understand it. And the best part? The fans, the haters, the ones who watch ironically… they all think they are better than the other people. They all want to be smarter, quicker, wittier, funnier. They are all trying to climb the hierarchy of knowledge, of elite humor, of being in on the joke. Some think Tyler is the joke. Others know the haters are the joke. Others are weird hybrids that are not self-aware enough to understand their own intentions, let alone Tyler’s.

What Tyler is doing isn’t new. Excluding those “who just don’t get it” is a long-practiced human art form. But I assert that the comedian that invented modern trolling in the ‘70s was Mr. Andy Kaufman.

Now, ladies and gents, it’s time to take a look into Tyler’s comedic lineage. “Who the heck is Andy Kaufman?” a simple-minded youngster might ask… Well, I don’t have time to go into a full-scale analysis of the man, but I’ll just say he was a performance artist who loved to play the villain.

Exhibit A: Andy’s bit as the World Intergender Wrestling Champion

In the old days, carnival wrestlers would tour the country and offer volunteers $500 to pin them in the ring. Andy did this exact thing, but he would only challenge women. In one wrestling performance on “SNL,” Andy pulls up in a robe and gym trunks and intensely wrestles a dancer, choking her and pulling her hair.

Before the actual wrestling, Andy would rile up the crowd by going on misogynistic and offensive rants. In a performance at the Comedy Store in West Hollywood, he says, “It takes a certain mental energy to wrestle, a certain strategy. Women, I do not think, possess this. Now, there are times when the woman does have this mental energy, for example in the kitchen, scrubbing the potatoes, washing the carrots, scrubbing the floors, raising the babies…” Okay boomuh!

Everyone hated this man. His parodying persona, his entire bit of playing the villain, went over the heads of most who watched him. The genius of his humor, though, was that his bits were almost impossible to completely understand — only Andy fully got it. He strove to make people angry, get the audience out of their comfort zones — the cringe was intentional. IYKYK.

Now, I’d like to quickly cite some honorable mentions whose commitment to their bits take my breath away just as much as Tyler and Andy. 36-year-old comedian Nathan Fielder had a show on Comedy Central called “Nathan for You” where he would help struggling small business owners in unconventional ways. Example: he helped a struggling liquor store by advising them to sell minors alcohol, but the catch was that they could only pick it up once they turned 21. He set up a cool basement hangout in the store for the minors to take pictures with alcohol so that they could up their coolness without actually drinking. Genius. I highly recommend this show.

Everybody in the show knows different things; the business owner genuinely believes that Nathan is a trained business consultant that assists struggling businesses on his reality TV show. The customers, meanwhile, are just regular people going about their day-to-day lives who are faced with unreasonable and absurd circumstances, and their reactions to these uncomfortable and weird situations bring out a deep humanity and realness in them. Everyone thinks they are being filmed for different things, which creates a dramatic irony that only Nathan and the audience of “Nathan For You” understand. IYKYK.

Next: Josh Ovalle. You might know him from the vine “Hi, I’m Jared. I’m 19, and I never learned how to read.” But if you followed his Instagram circa February 2018, you would be frankly amazed by the commitment of his most villain-like bits. You might remember when Josh staged a video of him getting punched by a guy named Jackson after he eggs him on at a party, and posts the video, asking his almost 400k followers to call the police, creating widespread pandemonium and hate toward Jackson. His next video shows him a few days later analyzing the video play by play like a sports reporter, as he reassures his followers that this is definitely not a bit. Then, the next day, he sits in front of a camera, thanking everyone for their support throughout the entire situation. Then, his tone changes midway through as he reveals that he was in cahoots with Jackson the entire time and ingeniously tricked everyone.

I swear the best part of this bit, personally, was knowing that Josh was trolling from the beginning, sitting back and reading all of the hate comments toward Jackson. His original plan was to release the first video, then Jackson would respond by releasing the long cut which showed Josh as the bad guy, then Josh would release an even longer cut which makes Jackson look worse, and so on and so forth. But the funny thing is that the vast majority of his Instagram audience did not understand the bit, and he had to cut his plan short, because there were safety concerns towards Jackson. Honestly, all I gotta say is IYKYK.

Now, I have a point to all this.

If you know me, you know that I am a method actress. And by that, I mean that I’m simply always in character. Not even I can distinguish between joke and reality when it comes to my core personality sometimes. But I’m not playing this character for others — no. I do it purely so that I can bask in the thought that only a key few truly understand when I’m intentionally joking. I’ve created quite the ecosystem of IYKYK in my everyday life.

And that’s why I admire these guys so much. They play characters and personas, and the joke is on everyone that doesn’t quite get it.

So yes, I truly adore Tyler and everyone else I cited. But the real kicker about this piece is that I am going into absurd detail exposing the reason these comedians are god-like in my mind, and many of y’all will still question my tone. “She writes about how she loves when people are confused by the bit… so is she being real, or fooling us all into thinking she genuinely praises the cringey TikTok POV guy as she laughs to herself about how dumb we all are?” I’ll let you be the judge of whether or not I am trolling.

To be completely honest, this piece is actually the most vulnerable thing I have ever written, because I am essentially exposing the very thing that makes me feel better than everyone. I am letting all of you readers into the bit — which takes away my power and superiority. So you are welcome, because self-awareness is the greatest gift. But now I have destroyed the very thing I have exposed, taking away the very power of IYKYK. So now, you don’t know. You will never know. You will never truly be in on the joke. So I’m sorry. Because self-awareness is also the greatest burden. So I guess you’re welcome again… Ignorance is bliss. But knowledge is the key to heaven… or hell. Sorry.

Thank you very much (IYKYK),

I stand with Tyler