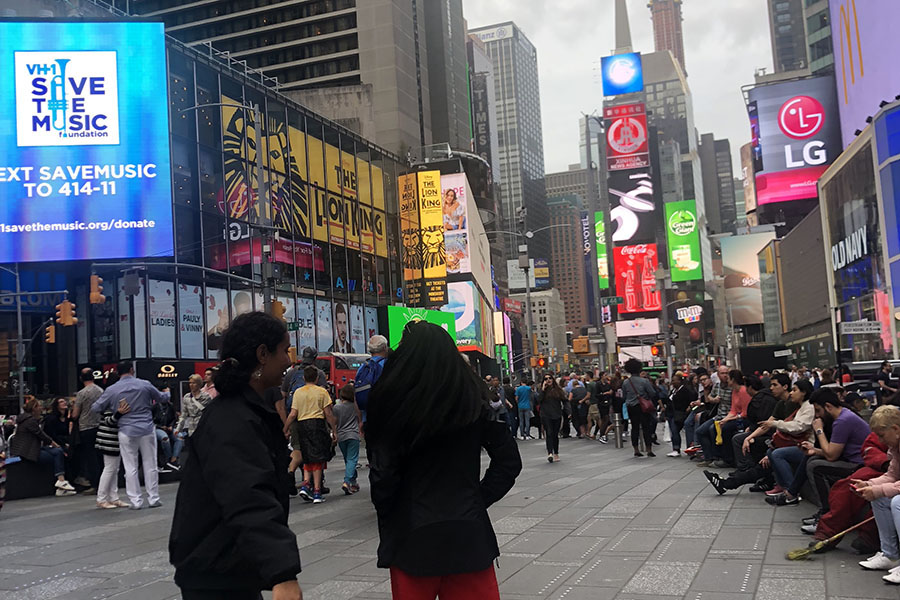 The author and Nikki Ariki '20 bask in the energy of Times Square on the East Coast College Tour 2019.

A yellow arrow screamed at me at the top of the screen, pointing to a subject line: An Important Update from NYU is Ready to View. I wasn’t nervous that day at all; I wasn’t expecting an email from NYU  for another three days. I read the subject line, closed my eyes, internalized the fact that the email that had just appeared could very well change my life and, of all things, walked away.

Leaving the email glaring at the top of my computer screen unread, I walked to the front of the room to give a presentation in religion class. I, for obvious reasons, experienced extreme difficulty trying to compartmentalize the email in order to give a worthwhile presentation. My mouth was moving, but I had no idea what was coming out. I could feel words coming out of my mouth — something to do with nuns and buses — but all I could hear inside my head was: Email. Email. Email.

When the presentation was over, I had to consciously think about how to move my feet to get back to my desk.

My obsession started during sophomore year, though I can’t really remember the timeline in any more detail than that, because I can’t remember the last time I wasn’t obsessed with NYU. I do remember, though, that sophomore year I was feeling more and more disconnected from the idea I’d had of becoming a doctor and practicing medicine, which I had always thought would be my calling. I started becoming more interested in movies, pop culture and fashion, and I really started coming into my own as a person.

I first visited New York in eighth grade, and sophomore year I started to think about how at home I’d felt there, in the chaos of the cab hailing, pedestrian swarms and overflowing trashcans. I started to realize that I wanted to be in New York, and I wanted to go to school there, too. Suddenly, NYU started to show up in my dreams — me walking around, books in hand, snow all around me — and I started to plan my future around the notion that I would go to school there. I knew I wanted to study something that had to do with pop culture, so I figured, because I enjoy writing so much, that journalism would be the way to go. My New York dreams consisted of imagining myself as an independent woman, writing for some mega publication, sitting on my couch writing my next piece, happy. I knew I wanted my career and my job to be something I loved, because I know so many adults whose jobs aren’t that. And New York isn’t just the hot spot for publishing, the mecca of writing and pop culture and fashion and everything that interests me, but a place I hoped would show me how to be independent and hard-working, how to be me.

Second semester of junior year was the most stressed I have ever been; I was my own worst enemy and put an immense amount of pressure on myself. Every decision and effort I made was motivated by NYU. I began one-on-one ACT tutoring to get my standardized test scores up. I became obsessed. During the summer, I would take at least one practice ACT test a day and spend four hours in tutoring. I would have nightmares about getting rejection letters, and I would check NYU’s average statistics of admitted students every day, convincing myself that they would change in the twelve hours since I last checked them. At one point it got so bad that I wrote the statistics on my bathroom mirror so I had a reminder every time I brushed my teeth. I’d go into the bathroom every morning to put my contacts in, and the first thing I’d see with clear vision was the NYU stats written in dry-erase marker on the glass. Then I’d brush my teeth, fixated on the numbers, subconsciously brushing the same spot in my mouth for two solid minutes.

I walked back to my desk after the presentation, relieved that I made it through still semi-sane. I texted my friend in distress, begging her to meet me in the bathroom, knowing that as much as I originally wanted to open the letter in the comfort of my bed with my door closed tight, I wouldn’t be able to safely drive home with that email sitting unopened and taunting me. I met her in the bathroom, without my laptop, to ask if I should even open the email at school.

“Will you be able to survive if you don’t?” my friend asked.

I gave her a hard no, and I ran back to the religion classroom and snatched my laptop, hurrying back to the bathroom as quietly as possible so as not to be caught by my teacher. Sitting on the stool by the trashcan, I opened the computer, and my friend and I stared at the screen, hands held so tight I could feel neither hers nor mine. I don’t think I breathed in the thirty seconds it took me to open the email, log into the application portal and click the View My Decision button, but the one second it took me to read the first line was the most exciting second of my life, as I realized that the sweat and tears, especially the tears, that I had poured into this dream was worth it.

In the rush of that moment, I thought that all of the stress-induced hair loss, the back pain from hunching over my computer, the blurry vision from editing supplements and the crying, especially the crying, would magically disappear. I thought that I would return to my pre-application-season way of being — going to bed before midnight, eating dinner with the rest of my family, getting lunch instead of getting tutored.

The Friday after getting the acceptance letter, I watched an episode of “Gravity Falls” and went to bed early. I woke up on Saturday and had the house to myself until the evening, because my parents and my brother went to a basketball tournament in Downey. And even though I still had to keep my grades up and apply for scholarships, I had a free Saturday to do whatever.

I realized that I was dealing with a strange problem that I hadn’t expected to have: I needed to find something new to be obsessed with. I’m extremely grateful and lucky to be in the position I’m in, and I am so excited for the next phase of my life. For now, though, I have no clue what to do with my brain.

So, I’ve been obsession shopping, trying to find something new to immerse myself in. First I turned to something I’d been wanting to get into for a while: Marvel movies, courtesy of Disney+ and Verizon’s free subscription for a year with an unlimited data plan. Watching 20 movies out of the 23 in the franchise in just six weeks, I hermitted in my room, blinds closed, pitch dark, bowls once filled with popcorn sitting empty on my dresser, my dog Monroe next to me, indifferent to the action onscreen, fallen into the same daze as I. For what it’s worth, having watched my way through 12 years of the whole Marvel thing, my favorites have been “Thor: Ragnarok” and both Spiderman movies.

Now, a month later, it’s awards season, so I’ve been waking up early to hear the nominations at 5:30 a.m. and watching all of the nominated films, though I have yet to cross “1917” off my list. Having watched so many movies and gone to the movie theater so many times, my eyes are feeling like they’ve jumped a few prescriptions worse.

I’ve also been learning how to cook, spending hours on end in the kitchen meal prepping with my dad. I do the chopping and dicing with my dad peering over my shoulder telling me to watch my fingers. A couple weeks ago I made the mistake of wearing my glasses instead of my contacts while cooking and cried the most I’ve ever cried while cutting an onion.

The most difficult part of the whole learning-how-to-cook thing has been trying to find music that my dad and I both like to listen to while cooking. I’m getting tired of Chicago, and he’s getting tired of All-American Rejects, so recently it’s been a lot of “Dear Evan Hansen.” After a few hours in the kitchen, I flock to my laptop to compile a list of recipes that I’d like to try my hand at. Last week I tried cooking a random chicken dinner I found when I googled “easy family recipes for beginner chefs.”

The next step after cooking would be meal-planning; I have never planned for anything important, let alone meals, yet here I am, with a designated meal planning notebook and a whole lot of optimism. Gen Z’s instinct is always to work on self-improvement in some shape or form; I know I certainly subscribe to the idea, and I am constantly looking for ways to make myself more useful, even if the attempts seem trivial.

Aside from the cooking and the movies, I’ve been making the effort to take care of my mental health through meditating, journaling, light yoga and essential oils for things like sleep and anxiety. My mom bought me an essential oil diffuser, so now it always smells like lavender in my room, unless someone in my family is sick, in which case I throw in a few drops of doTERRA On Guard oil, which is antibacterial and kills airborne viruses. It smells heavily of cloves and oranges and makes Monroe sneeze profusely.

The yoga has taken some practice. I’m just about the least athletic person you’ll ever meet, and my flexibility is next to nonexistent, so light yoga really is light yoga. I usually just do my yoga in my room with some background music, often Hozier, often before bed. Yoga with Adrienne is my go-to yoga guru. I love her channel for the yoga and the yoga alone though. Sometimes when her voice gets louder and she repeats instructions over and over, it can get on my nerves, and if that happens I just tune her out and turn up the Hozier louder.

So where does this all lead? Well, right now I’m determined to fix my face. I have successfully wasted lots of money on skincare products: Kiehl’s toner and moisturizer, Glossier hyaluronic acid serum and Origins face wash are favorites, though I’m currently researching glycolic acid products and leaning towards the Mario Badescu glycolic cleanser.

I haven’t quite figured out if these products have transformed my face yet.

I know, though, that all of the cooking and movie watching and yoga has been nothing less than me trying to have my coming-of-age-movie, stare-at-myself-in-the-mirror moment: bathroom dimly lit by a single bulb, Blondie’s “Dreaming” muffled in the background, water splashed on my face for dramatic effect. You might think I was in a John Hughes movie.

What “obsession shopping” really means is “identity shopping.” It’s been a soul search of sorts. My brain is coping with the fact that I am transitioning out of the most influential phase of my life and into a phase consisting only of first-times and brand-news. I’ve been trying to find something to hold onto for when I’m thrown into the deep end as a grown-up girl in Greenwich Village.