How the ‘Rise of Skywalker’ ruined Poe Dameron 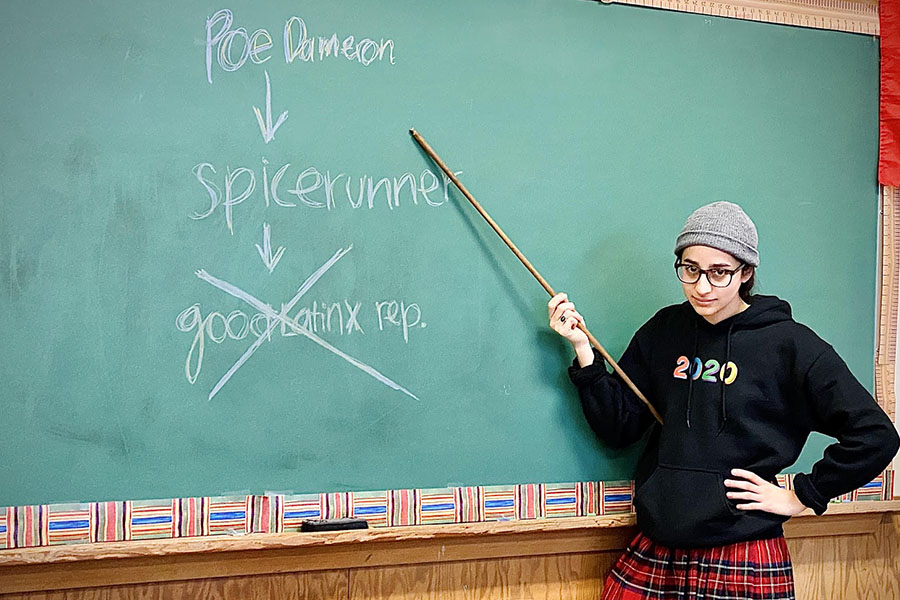 The author teaches her friends about the disastrous harm Poe Dameron’s spice smuggler's past does to his identity. Spice means drugs, by the way.

In December of 2019, Disney released “Star Wars: The Rise of Skywalker,” the latest installment in the “Star Wars” franchise. Suffice it to say, I was incredibly excited to see it.

Back in 2015 when “The Force Awakens” was released, I got attached to the leads, Finn, Rey and Poe. Most important to me of these new characters to enter the franchise was Poe Dameron. Poe, a space pilot and champion of the Resistance, is played by Oscar Isaac, and seeing Isaac on screen back in 2015 was monumental. Finally, “Star Wars” featured a Latinx hero in space. Pretty iconic, if I say so myself.

Poe Dameron turned me into a Star Wars fan. I started eating Campbell’s soup with his face on it. I took pictures with cosplayers I saw at fairs. I designed my Twitter account layout to highlight his best scenes. His droid BB-8 was his partner-in-crime, so I wore BB-8 socks.

Poe was charismatic, heroic, bright, multi-dimensional — everything a member of the Resistance should be. “Star Wars: The Force Awakens” brought me a character I could look up to and love whole-heartedly. I became part of the Poe fandom online to talk about everything there is to say about the lovable Yavin-4 native. Strangers and I had back and forths about his strength in enduring Kylo Ren’s torture, his compassion in giving Finn a name and his charm in literally any scene he appears in. He inspires thousands in the Resistance, and he inspired us.

In the second “Star Wars” vehicle to feature Poe, 2017’s “Star Wars: The Last Jedi,” Poe’s character gets a little murkier. His suave, Han Solo-esque attitude turns reckless as Poe forgoes his commander’s orders and ends up responsible for the deaths of hundreds in an unplanned violent situation. This selfish act gets him demoted but also talked to by General Organa. He gets to learn from his mistakes, suffer the consequences and realize his bravado isn’t what makes a hero successful. In the end, Poe evolves as a person in a (relatively) well-explored way.

The new film, “Star Wars: The Rise of Skywalker,” has many redeeming features and proves mostly successful in concluding the Rey/Finn/Poe saga. Unfortunately, however, the new “Star Wars” ruins Poe.

What I can’t tolerate is director JJ Abrams wanting to make Poe a grittier character. He tries to make Poe have a darker past as a drug-smuggler. Not once in the previous two “Star Wars” movies with Poe has the character dropped hints about a secret past. In his first two films, he is depicted as practically born into the Resistance with his two parents who are literal heroes for the good side. So, it feels out of place when Finn nonchalantly eggs Poe on after learning his hero best friend used to be a drug dealer: “Poe Dameron. Runner of spice. Get your spice!”

The joke takes two seconds and is never brought up again. Excuse me, what??? If you were going to give the only Latinx character in this movie a drug-filled past, could you not have explored it for more than two seconds? Tacking on a drug-fueled past for the only Latinx character in this trilogy seems like a senseless decision and one that plays into superficial, harmful Latinx stereotypes. This might seem like a brief quip, but it perpetuates the idea that Latinx people are drug dealers as well as the stereotype that Latinx people are criminals.

Also problematically, JJ Abrams suggests the possibility of a romantic relationship between Poe and Zorii, the leader of a spice-running group.

Let me be the one to say it: Poe Dameron will never be heterosexual. Let’s stop pretending he is. From day one Poe has been gay. In all three of his “Star Wars” films, Poe flirts with Finn in every interaction they share. Millions of fans have picked up on the ever-present chemistry between Finn and Poe, and the “Star Wars” fandom celebrates Poe as a gay icon. And, Oscar Isaac, the man behind Poe, has even said that he’s played Poe as gay from the beginning (despite objections from Disney).

When Abrams suggested Poe might be straight, Isaac scolded Disney for being cowards and stated he doesn’t see himself returning to the “Star Wars” universe. Poe might be ruined for me because of “The Rise of Skywalker,” but at least Oscar Isaac still represents the heart of a true hero of the Resistance.