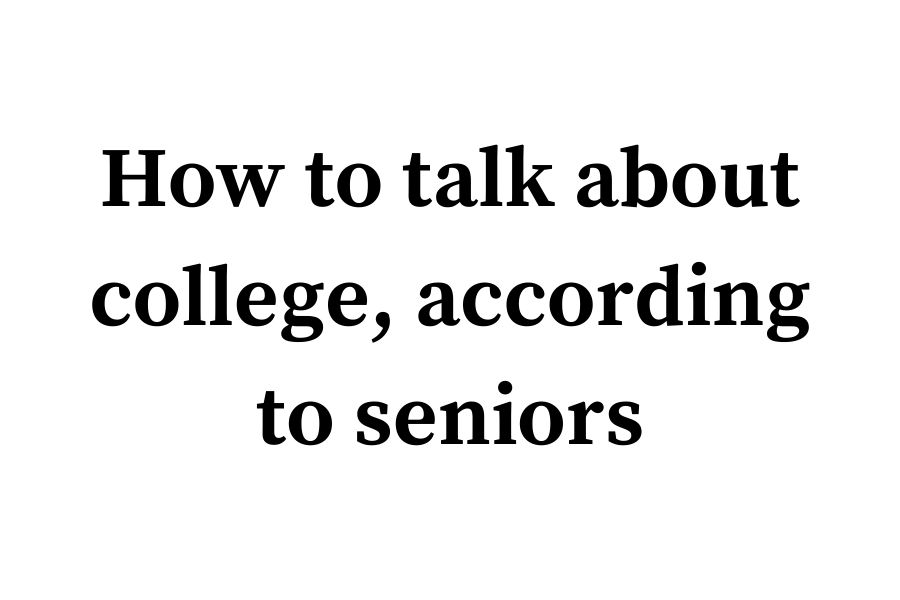 By Cerys Davies and Nikki Godinez

As family gatherings happen and acceptance letters are sent, the overwhelming interrogation persists. Questions about when and where have bombarded Tolog seniors for months. “Which colleges have accepted you?” “Did you apply to Harvard?” “You’re going in undecided? Yikes!”

The Veritas Shield wanted to check in on how Christmas break went for our admirable seniors who are almost at the finish line. We sent a survey asking the class of 2020 to fill us in. And, for peak truthfulness, we asked our seniors to reply anonymously. The questions we posed were: Over the holidays, how did it feel to get asked so many times about college? What’s the best way for teachers/classmates/other people to talk to seniors about college?

The most nerve-racking part about being asked about college was having to list all of the schools I was applying to, with the thought that I would see some of these people again, and I would have to tell them if I didn’t get into a school. It’s an awkward conversation to have with anyone. I think the best way to ask is, “What are you thinking of doing next year?” One can assume the question is about college, but the person could also choose to take it in another direction. [The question] also doesn’t assume that the person is going to college right after high school. Maybe they’re taking a gap year and we would never know it until we ask!

I actually found it really funny. Everyone that asked me about college stuff expected me to have an answer or at least an idea of what I am going to do. I would typically respond with “I am still waiting to hear back from a lot of schools, so I am not sure.” Because that answer doesn’t give the person asking me the validation he or she needs, the follow-up question would be, “Oh that’s okay, do you have a top school?” Then I would respond with “Whatever school will take me.” This still doesn’t give that person enough validation, but he or she has not realized that I really don’t have any idea what I am going to do. So that conversation ends and shifts to the generic, “How was your Christmas?”

The best way for people to talk to seniors about college is just to ask how they are doing with the process. Based on the response, you have to gauge whether or not they have a positive outlook. If not, just tell them that you are supporting them!

It felt like I was repeating myself a hundred times, especially because I still don’t know where I’m going to school. I think the best way to talk to seniors is to not talk about it unless we bring it up. It’s a touchy subject. There’s a lot of anxiety surrounding the topic, so just wish us luck and that’s good enough.

It’s so exciting, but only because I know where I’m going. The best way to initiate talking about it is to just not do it unless you know that person is set on a school. It’s so uncomfortable to be asked invasive questions during the waiting and/or deciding process. It is much more respectful to wait until that person has made a decision, so we don’t unintentionally make things more difficult for them.

I liked the attention. I know that I am an outlier, but I’ve been excited about college since I could grasp the concept of it. Listing my colleges for my family and friends made me feel proud but simultaneously scared. I kept wondering, “If I tell them about all these schools and I don’t get in, will I look like a failure?” I think that we should encourage seniors to be proud of their college choices. We earned these opportunities! Let’s embrace it in a non-competitive way.

I mean, I get it. It’s an important time in our lives, but at some point, I don’t want to keep talking about college, because it fills me with anxiety. I don’t mind talking about college with my friends, because they can better empathize with the whole situation, but with adults or older people, it’s a different story. Sometimes, I feel judged by where I applied or embarrassed about getting into places. No one should feel bad about not getting in somewhere because of how biased the college decision process is, but older people don’t keep that in mind.