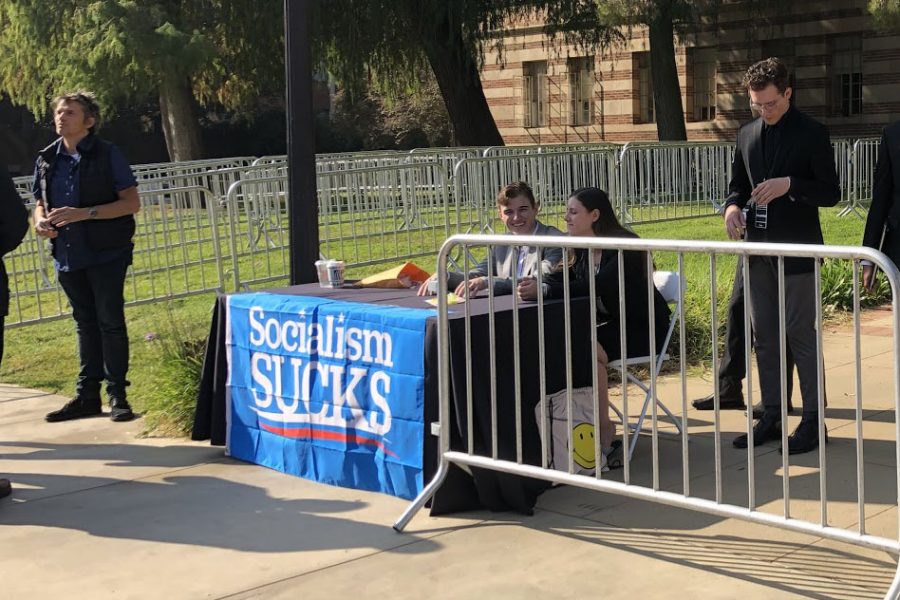 At a Turning Point USA event in October, UCLA Republicans peacefully express their thoughts on socialism.

Conservatism has been a controversial topic of discussion lately, especially around such issues as the border, abortion and Donald Trump’s presidency. The United States has become more divided politically, and people are becoming less tolerant of differing perspectives. The rise of the progressive movement and Donald Trump’s presidency have made conservatism a charged topic, bringing up some questions about its future. As much as I would like to be hopeful about conservatism’s future, there are many roadblocks that make me skeptical.

In the last few years, colleges and universities have been getting involved in the current political drama, and their blatant preference for the Democratic party is contributing to the fall of conservatism. They preach biased messages and ignore their Republican students, so it’s no wonder so many students nationwide feel misrepresented or isolated.

A September survey in the National Review reported that 73 percent of Republican students have concealed their political views for fear of a negative grade impact.

In what world is that okay? The classroom is a place to widen perspectives, expand knowledge, interact with others, break boundaries and discuss the essential questions of life. The classroom is not a place for students to feel judged or to be put down by their teachers and classmates for their beliefs.

At an event with Newt Gingrich in October, a college student at UCLA asked for advice about what to do when college professors marked her down on papers because of her political views. His advice was to file charges against the professor.

These are college professors who are supposed to be unbiased, but their political views somehow influence the grades they give their students, which is unjust and entirely unethical. Conservatism is under attack.

I spoke with a number of conservatives around the country to get their take on the roadblocks such as biased professors that stand in the way of conservatism’s future.

Larry Arnn, the president of Hillsdale College, believes that conservatism is responsible for its own fate.

“Trump rightly reminds us that we are responsible for our own country first. As the old saying goes, ‘friends of liberty everywhere, custodians only of our own,’” Arnn told me via email.

Mark Kolb, a healthcare professional from Ventura County, believes that Trump’s conservative policies, including creating jobs, starting construction on the wall and bringing unemployment rates to record lows, give him a good chance of being reelected, and give conservatism a good chance of gaining momentum.

“I think he is going to be reelected, and I think the future is bright. His tone is one and done. I don’t think we are ever going to see anyone like him again. I think the future of the party looks really good, partially because of the results under his leadership and also partially because of the opposition’s policy proposals which, in my opinion, are pretty wild,” Kolb said.

Whether the overall amount of conservatives will increase or decrease in the future is in the hands of our generation. It really is all up to us, considering that young people are becoming more liberal. The younger generation has a stronger view on inclusivity, and conservatives who focus on the intrinsic value of others are often misinterpreted.

Gen Z values individualism less, and conservatism is based on individuality. This is part of the reason that a higher percentage of youth are liberal. Being an individual means having a limited government, so that you have the power to make your own decisions.

Despite Gen Z’s liberal tendencies, many Republicans believe the conservative numbers are looking up for the future because liberalism has been too extreme.

I recently attended a Turning Point USA event with Donald Trump Jr., Kimberly Guilfoyle and Charlie Kirk at UCLA. There, I spoke with a few conservative students who described their experiences on a campus full of liberals. They described to me a tumultuous campus environment.

At the event, there were some liberal protestors. The protestors had a designated area where many held “Trump/Pence Out Now” signs. Even though both sides of the aisle were pushing each others’ buttons, the protesting outside was peaceful for the most part.

Despite liberalism’s hostility, I don’t see conservatism going in a positive direction, unless something changes. I can only hope to see more of Gen Z become conservative, but that’s not the way it’s going as of right now. Many of us do not form our own opinions and believe everything we are told. Our generation is being influenced by outside sources, such as schools and universities. In order for something to change, Gen Z needs to educate itself and not just go with the flow. Form your own opinions and be an individual.