Will technology revolutionize the world of fitness? 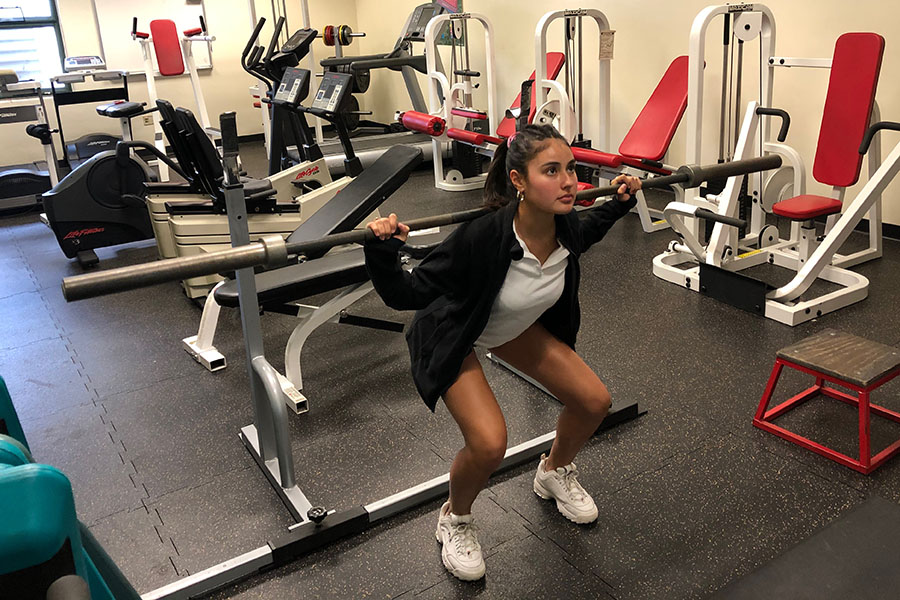 No form of swallowable technology can give anyone the same look of determination Carisa Joyner '21 has on her face.

According to a study in Forbes, obesity in America is at an all-time high, affecting 39.6 percent of adults and 18.5 percent of children, a considerable jump from 30.5 percent and 13.9 percent, respectively, in 2000. Since 2008, the number of fitness centers in the US has increased from about 30,000 locations to 38,000, making the US the country with the most fitness centers in the world.

The fitness industry is booming, yet Americans remain as unfit as ever. The latest fitness technology, however, may help Americans maintain healthier lifestyles.

Wearable technology such as the FitBit and Lumo Lift has become increasingly available over the past few years as costs have grown cheaper. The FitBit device, which looks like a watch, tracks statistics such as heart rate, steps taken and stairs climbed each day. Lumo Lift, a small pin that attaches to clothing, alerts the wearer with a small vibration when her posture begins to slack and tracks how long the wearer has stood up straight or slouched for the day.

“My FitBit has been a big help in tracking my daily number of steps,” Strotz said. “It also motivates me to work out more often and serves as a little reminder for me.”

Swallowable technology has also emerged on the fitness tech market. It’s been available since 2017, making its way onto the market with the e-Celsius pill, released by the French biomedical company, BodyCap. The e-Celsius pill sends radio signals from inside the user’s body to an external computer that tracks overall body temperature and sends alerts whenever body temperature is under or above healthy limits. BodyCap plans on adding newer features to the pill, including monitoring pH levels and heart rate.

Even MIT has caught on to the new swallowable tech fad. Researchers from the university have developed a swallowable tracker that monitors heart and respiratory rate. As it makes its way through a patient’s body, the tracker houses itself in the gastrointestinal tract and remains for about a day or two. Even though its lifespan is rather short, it’s helpful as it shows various statistics within one’s body.

Rebecca Araki, a physical therapist and personal trainer at Catz, sees the value in this new piece of tech but also recognizes some of its more discomfiting elements.

“An ingestible tracker sounds absolutely amazing for athletes and even regular gym patrons, since it gives you one less thing to wear during your workout,” Araki said. “My one issue with it, though, is that it sounds rather invasive. I don’t think that too many people like the idea of having a piece of technology inside of them.”

When asked about how she would feel about swallowing a fitness tracker, Julie Gonzalez ‘21 admitted to feeling wary about it.

“I feel a little bit weirded out to have something inside of me tracking my body’s functions from the inside out,” she said. “It just seems like a huge invasion of privacy. What if someone like the government were to hack into the tracker and take over my body?”

Since scientists have already developed a tracker that goes inside your body. What could possibly come next?

“I can definitely see people developing some sort of serum that they inject into you, almost like a shot that you get at a doctor’s office. It would essentially function the same way as current-day trackers, just obviously in a different form,” Araki said.

While an injected serum may still seem a little invasive, Gonzalez has an alternative solution.

“A dermal patch that could monitor your daily activities and heartbeat would be much more widely accepted,” she said. “It’s less invasive than swallowing something, but it’s still personalized, and you don’t have to take it off like a FitBit or other sort of tracker.”

Tologs, for the most, are skeptical of swallowable technology.

“People just aren’t ready for something swallowable, especially when it’s practically a computer in your stomach,” Strotz said.