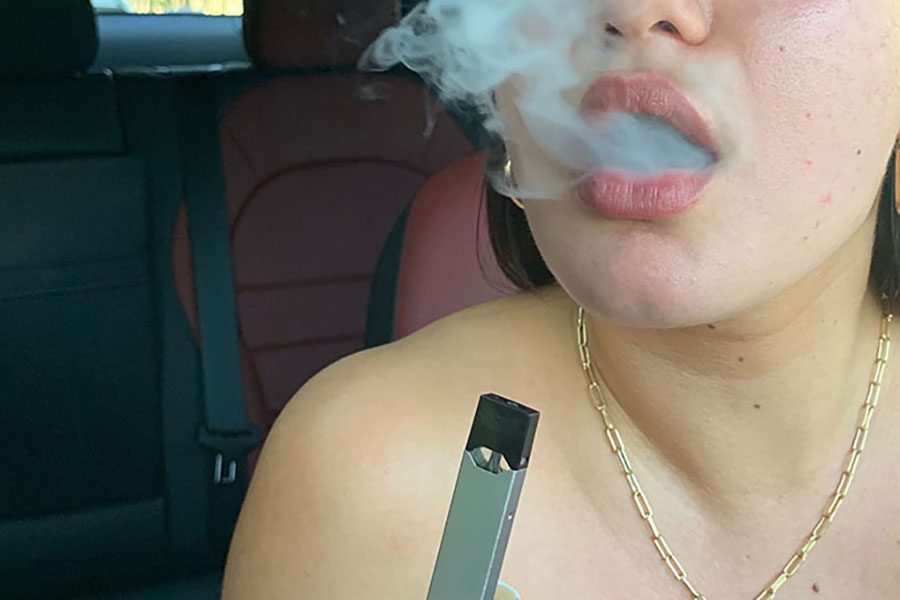 One Juul pod contains the same amount of nicotine as 20 cigarettes.

You’re walking down Colorado Blvd. in Old Town Pasadena and all of a sudden, you smell cotton candy out of nowhere. You continue walking, and the smell gets even fresher and stronger. You start to get excited; you’ve never seen a cotton candy vendor in this area before, and there’s nothing you’d rather sink your teeth into than a blobfish-sized bundle of spun sugar. As you turn the corner you realize, no, it’s not cotton candy but Chad, the Starbucks barista, and his cotton candy cloud of chemicals.

Vaping was originally created to help smokers quit cigarettes, but it has now turned into a vice that millions of people share, especially teenagers. The federal government conducted a survey in 2018 that found that 21% of high school seniors had vaped within the last 30 days.

While the  long-term health effects of vaping are currently unknown, an outbreak of vaping-related illnesses began to sweep the U.S. starting last summer. The Center for Disease Control and Prevention reported on Sept. 26 that federal health officials are now investigating 805 possible cases of lung illness associated with vaping in 46 states. According to a Time Magazine report released on Oct. 3, the vaping-related death toll has now risen to 18.

Just like at other high schools, vaping has become a part of life among students. How, though, do Tologs feel about the recent news?

One  anonymous Tolog says that she has continued to vape, but less often than before.

“Everything that is going is definitely scaring me. I’ve started vaping less because of it, and I only find myself vaping in group settings instead of when I’m all by myself,” the Tolog said. “I’m definitely not addicted.”

Another anonymous Tolog has a slightly different view of the recent vaping-related illnesses.

“I still vape regularly. Everything on the news is pretty scary, but I’ve done my research. All of the substances that have gotten people sick or hospitalized were purchased off the black market. When I’m buying my products, I make sure that my stuff isn’t illegal, because I don’t want the same to happen to me,” this Tolog said.

This Tolog went on to say that  while she has been trying to quit vaping, quitting has been hard to do after having vaped “for the past three years.”

“The only thing that could possibly scare kids into quitting would be even more deaths that are equal to those who have died from smoking,” Lauren Gmelich ‘21 said.