Billie Eilish is fueling your sadness 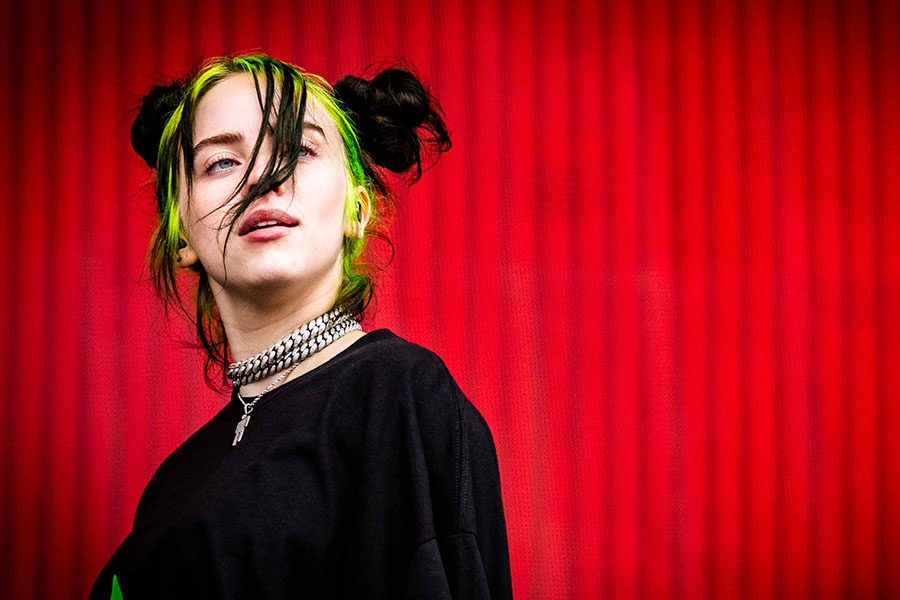 Eilish is the youngest person to debut at #1 on the Billboard Hot 100.

It’s a lonesome Tuesday evening, and you’re lying in bed sporting a messy bun and an oversized sweatshirt. Your room lights are off, but your multi-colored LED lights are on. You grab your Billie Eilish vinyl and toss it on to your Urban Outfitters record player. The slow crackling of the needle fills the emptiness in your room, but not in your heart. In order to fill the melancholy ambiance, you blast Billie Eilish’s dramatic words “you really know how to make me cry, when you gimme those ocean eyes.”

Okay, you’re sad. I get that, but is Eilish capitalizing on your sadness? Is Eilish taking advantage of your sadness?

Billie Eilish, known for her blue (sometimes green) hair and baggy ski attire, has taken the music industry by storm, setting the female artist record for the most Billboard Hot 100 hits at the same time when Eilish had 14 songs on the list in April.

Eilish’s career started in 2017 at age 14 when she uploaded her debut song, “Ocean Eyes,” co-written by her brother, Finneas O’Connell, to SoundCloud, racking up millions of streams. Now in 2019, at age 17, Eilish has over 44 million monthly listeners on Spotify, making her the ninth-most-listened-to artist in the world on that platform.

That being said, Eilish isn’t perfect. Lots of Gen Zers idolize Eilish for her ukulele skills and edgy, alternative voice, but they are not aware that what they are singing along to is actually glorifying depression and offending the LGBTQ+ community.

To those unfamiliar with  Eilish, here are some of her song titles: “xanny,” “wish you were gay,” “all good girls go to hell.” The song titles alone communicate negativity and mention sensitive topics.

“Xanny” refers to Xanax, a sedative drug used to treat people with severe anxiety and panic disorders that is highly dangerous when used recreationally. The song is about Eilish rejecting the drug culture that her friends have indulged in and places Eilish on a pedestal for being sober enough to drive home. Using her friends’ unhealthy substance abuse addiction to make a song is one example of Eilish using sensitive topics to target a younger, edgier demographic.

Eilish said in an MTV interview, “I just wanted [‘xanny’] to feel miserable.”

Eilish commercializes depression, making it more like a trendy vibe rather than a real disorder. Depression sells the same way burgers do: You don’t necessarily want the burger in that fast food commercial, you want the hot model that comes along with it, even if the reality is that you’re just getting high cholesterol and the model you imagined is nowhere in sight.

Let me explain myself: Depression is the burger, Eilish’s popular aesthetic is the hot model holding your quarter-pound burger. In an attempt to imitate her aesthetic, teens are left neither with edgy Instagram posts nor famous friends but instead feeling sad and unaccomplished. Being actually sad isn’t actually as cool as Eilish makes it out to be.

Members of the LGBTQ+ community are also upset with Eilish for her song “wish you were gay,” saying they felt that they were being disrespected. The song talks about how Eilish wishes her love interest were gay so that she would not feel bad that he doesn’t like her. The LGBTQ+ community felt wronged, saying they were hoping for more queer pop content. Eilish’s ignorant song about her insecurity at being rejected by a straight man wasn’t it.

Whether you are a die-hard Billie Eilish fan not, I urge you to be aware of the messages she spreads. Eilish’s aesthetic glorifies being depressed as “edgy” and “in style” through her brooding looks and music that scream “misunderstood.” Don’t fall into the trap of wanting to be like Billie. You don’t have to be twisted or edgy to fit in with the trends.