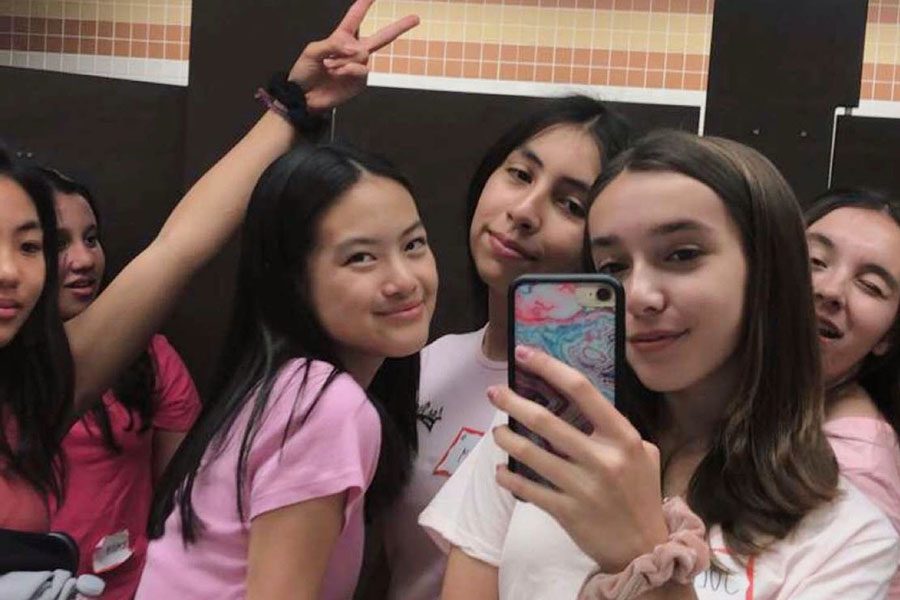 This group of freshmen had the best time of the mixer taking group mirror selfies.

You approach St. Francis High School, stumble inside the quad and stand with the huddle of teenage girls backed into a corner. You see upperclassmen laughing. Are they laughing at you or at this entire situation? You awkwardly find your way to the table with enough brownies and cookies to feed a football team.

“Oh my God,” you think to yourself. “Will the JV football team be here?” Sweat forms on your brow as you fiddle with your nearly empty cup of practically neon lemonade. You move along to a small group ice-breaker activity where you are asked, “Where do you see yourself in 10 years?”

How are you supposed to know the answer to that? You have no idea. But, no matter, because a handful of over-eager seniors have started up the Cupid Shuffle, a groovier version of the Cha-Cha Slide, which is the PG version of the Wobble — all iconic line dances. Here starts the longest four minutes of your life, and you begin to think: when will this mixer end? What am I even doing here? Is this worth the hype?

The afternoon of Oct. 4 marked the day of this year’s iconic, infamous freshman mixer, where the classes of 2023 from St. Francis, Flintridge Sacred Heart and new-for-2019 Mayfield Senior School took part in small group activities such as Zip-Zap-Zop, Rock-Paper-Scissors and ice breaker questions. Between activities, the freshmen ate and mingled as a big group.

“I thought it was a lot of fun. I had a great group that had people I knew and a few I didn’t. The food was also a plus. Pizza is my favorite,” Cameron Bender ‘23 said.

While some groups were participatory, some gave in to the cringe-and-stay-silent routine instead.

“I thought the activities and the leaders were fun, but the students [in my group] wouldn’t participate, so it wasn’t as exciting as I thought it would be. I would have gotten more out of it if my group had been less shy with each other and the girls and boys had actually talked. But, it was still fun with the pizza,” Kana Park ‘23 said.

After the mixer, Tologs were able to attend the football game, which many thought of as the night’s highlight.

“I honestly didn’t meet that many people at the mixer besides the people in my group, but the football game after made up for it,” Graciela Tu ‘23 said.

Is the freshman mixer a rite of passage? An excuse to overeat extremely dry deserts? An incredible opportunity to bask in the presence of teenage boys? A few hours to wander around different campus locations and get your Fitbit steps in?

The freshman mixer is inherently awkward. That’s okay, though. A majority of Tologs had a great time after the nerves died down.

“I felt a little awkward during the activities at first, but towards the end, I felt more comfortable. It was a really nice time and I got something out of it for sure,” Cassandra Huston ‘23 said.