Who wears the pants at FSHA? 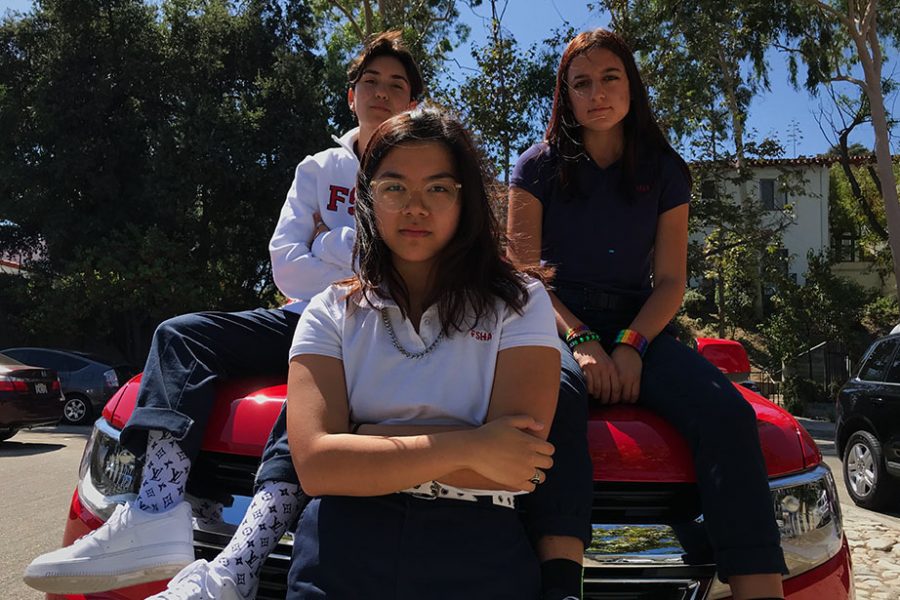 Before first-wave feminism took hold in the 1920s, there were pants for powerful men and there were skirts for docile women. Then World War II came along and women joined the workforce and donned denim. Being one of the first women to wear pants in America could have been nothing other than terrifying and empowering at the same time. But, no longer do I have to wonder what the first-woman-in-pants experience was like, for after Flintridge Sacred Heart adopted a new pants option last year, I became one of the policy’s most enthusiastic proponents.

Once upon a time, FSHA did in fact have uniform pants, but after Tologs stopped buying them, CKW stopped selling them. This didn’t seem to bother enough students to get any sort of movement going until last year, though, when the official pants committee was born, igniting the final push for FSHA’s new uniform pants.

I joined the pants committee unsure of what I was actually signing up for, but I knew what I wanted — pants — and where I wanted to wear them — school. For many moons, we sat around a table, debating what style, color and cut would please the most students. The process was more tedious than I’d hoped, but that didn’t outweigh my longing for uniform pants, so I kept going to the meetings. Finally, we settled on a straight-leg, natural-waisted, khaki or navy-colored pair of pants. Once the administration approved them, we announced the decision to the school.

I needed a pair of these pants, and, once the decision became official, obtaining a pair was fairly simple. I called CKW, the school’s uniform distributor, to see if they had FSHA’s new navy Dickies in stock, and I drove to pick up and pay for the bad boys. While I had no trouble getting my hands on a pair, other students found the process a tad frustrating. Celine Moradi ‘20 recalls the woman working at the CKW storefront forcing her into a size that she didn’t feel comfortable in.

“She assumed I wanted them tight, and, even when I asked for a bigger size, she wouldn’t bring a pair to me. She kept saying that I could make them more fitted, completely ignoring how I didn’t want them to fit me so tight,” Moradi said.

The fit of the pants was one of the main concerns of the pants committee, so I was disappointed when, after meeting week after week last year and putting a lot of thought into deciding on a straight-leg, natural-waisted fit, the pants I put on were skin tight and nearly low waisted. I’d purchased my normal pants size, and while I get that sizes vary from company to company, this was absolutely ridiculous. My legs were being strangled, but I had enough room at the waist to fit an entire Thanksgiving dinner and then some. I spent 15 minutes in my room lunging and contorting my body as if I worked for Cirque du Soleil, just to loosen the pants enough to be able to walk up the stairs. However, I still wanted to wear pants to school. The minor inconvenience of strangulation wouldn’t stop me from wearing them the next day.

I threw together quite the look for my first day wearing pants: I styled them with my long-sleeved polo, two-inch platform sneakers and a bright red belt. As it turns out, styling the pants was an important step towards feeling like myself in them, which was the point of getting pants in the first place. But, this didn’t change the fact that I was, nevertheless, terrified when I rolled up to school that day. Hopping out of the car, fellow Tologs questioned me about the origins and comfort level of the pants. The experience was quite overwhelming but also absolutely empowering. Who would have guessed that almost 100 years after the first pants revolution and almost three waves of feminism, slipping on a pair of humble peddle pushers would make me feel so happy?

I was not alone in this sentiment.

“The new pants take away the self-consciousness I have about my body and just make me overall happier,” Bella Germano ‘21 said, who has been hailed as the pants-wearing queen.

My strong preference for pants — both for style and comfort — has often left me feeling uncomfortable in the uniform skirt, hyper-aware of how I’m sitting instead of paying attention in class. The pants took my skirt-centered insecurities, beat them to a pulp and served me confidence on a gold platter instead. Now, I pull up to school feeling 2009 Gaga, basking in the light of “The Fame Monster.” I can sit in class the way I want to. I can put on my backpack without panicking about it pulling up my skirt. I can do handstands and cartwheels and somersaults down the hallways and across the parking lot if I feel so inclined.

I’m thrilled that we now have a uniform-friendly pants option. I now spend my school days with a new kind of spring in my step. The pants may not be the cute, straight-legged, natural-waisted, “I’m-gonna-kick-ass-today” pants we settled on. The conversation doesn’t have to be over, though. In no way do these pants have to be the end all be all of the pants at FSHA. We can summon the pants committee once more and work together to get the pants suited to the preferences of the students, find a dress uniform pants option, and who knows… maybe even find some uniform-friendly jorts?